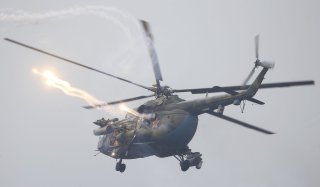 Russia’s armed forces are hosting a series of large-scale international exercises in Southern Russia and parts of the Caucasus, drawing the ire of Ukraine while also highlighting the limits of Russian military power in shaping Eurasia’s complex geopolitical landscape.

Kavkaz—Russian for “Caucasus”—2020 is the last in a cycle of four rotating regional exercises, preceded by ZAPAD 2017, VOSTOK 2018, and TSENTR 2019. These exercises are a means of gauging battle-readiness in each of Russia’s four military districts: Western, Eastern, Central, and Southern, respectively.

Around 150,000 military personnel are expected to participate in military drills held in Rostov, Volgograd, Astrakhan, Crimea, Adygea, Chechnya, Dagestan, and South Ossetia throughout September. The vast diversity of locales is meant, in part, to facilitate a wide range of drills involving around 26,000 pieces of military equipment. The full extent of the exercises is unclear at the time of writing, but Russian media reports from prior weeks have shed some light on the event. According to state media outlet TASS, there will be a major artillery and rocket component, including Tornado-G rocket launchers and 2S9 NONA gun mortars. These will take part in drills held in nineteen firing ranges strewn across the Southern Military District. Around 500 tanks and 300 aircraft will also be involved in war games, maintenance/repair exercises, and deployment drills across the Caucasus.

Despite comprising a relatively small portion of the KAVKAZ 2020 exercises, the naval drills being held in the Black Sea area have garnered outsized media attention due to ongoing protests from Ukraine. Kiev’s deputy foreign minister Vasyl Bodnar warned earlier this summer that the Black Sea exercises may be used as cover for Russian military aggression against Ukraine. In fact, these concerns were echoed in July by the spokesperson for the Main Intelligence Directorate of Ukraine’s defense ministry Vadim Skibitsky, who announced that Ukraine is investigating if “the exercises can be used as a pretext for other actions.”

Nevertheless, the North Atlantic Treaty Organization and Washington have remained largely reticent concerning the exercises; instead, the more serious political controversy surrounding KAVKAZ 2020 centers on the participants themselves. More than a simple show of military might, the Zapad, Vostok, Tsentr, and Kavkaz drills serve to convey the Kremlin’s indispensable role in Eurasian security politics. Troops from as diverse a cast of Eurasian actors as China, India, Pakistan, Armenia, Azerbaijan, Iran, Syria, Belarus, Abkhazia, Turkey, South Ossetia, Mongolia, and all five of the Central Asian states are expected to take part in KAVKAZ 2020. That list harbors more than a few antagonistic relationships—most prominently, Armenia and Azerbaijan are currently engaged in a hot territorial conflict. This is by design, as Moscow has long cultivated the image of an authoritative geopolitical broker in Eurasia.

But that image has been complicated by New Delhi’s recent decision to withdraw from KAVKAZ 2020, as clashes continue between Indian and Chinese troops along the contested Himalayan border zone between the two countries. India’s Defense Ministry also cited coronavirus concerns as its official reason, but numerous Indian defense sources have since confirmed that New Delhi’s decision stems from the ongoing Indo-Chinese conflict.

Though it is unlikely to be a long-term source of strain in Russo-Indian relations, India’s untimely withdrawal undermines the Kremlin’s image as a Eurasian security linchpin around which all other regional actors must orbit. It also speaks to the practical limits of Russia’s geopolitical pull outside of the post-Soviet sphere, particularly when dealing with similarly powerful actors engaged in faraway conflicts that Moscow is ill-equipped to moderate.