Why Russia's Sukhoi Su-33 Fighter Was a Failure 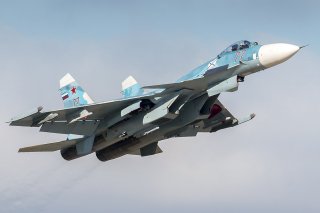 The Sukhoi Su-33 distinguished itself in the early 2000s as Russia’s most capable carrier-based air superiority fighter but fell into naval aviation limbo after being eclipsed by a smaller and more versatile competitor.

In the latter stages of the Cold War, Soviet strategists conceived a new power projection platform to secure the USSR’s vast Eurasian frontiers and compete with NATO’s carrier strike groups: “heavy aviation cruisers,” or a hybrid cross between an aircraft carrier and heavily armed battleship. In their earliest implementation, these heavy cruisers carried Yak-38 VTOL fighters; however, the Yak-38 was promptly retired for its anemic performance and crippling technical problems. The Soviet Navy sought a more robust carrier-based solution, boasting a longer range and greater payload capacity for high-intensity missions.

Toward the late 1970s, the decision was made to develop a carrier-based variant of the prolific Su-27 Flanker. Initially labeled the “Su-27K,” the fighter was rebranded as the Su-33 after its introduction in the summer of 1998. Despite their outward similarity, the Su-33 features a series of practical changes over its Su-27 counterpart: a reinforced undercarriage, rugged landing gear, canards, folding wings, noticeably larger wing area, and slightly more powerful AL-31F3 engines. These design features are specifically meant to accommodate the tighter layouts and smaller runways of aircraft carriers. The Su-33 also features two additional payload hardpoints for a total of 12, and—despite widely overlapping with the Su-27 in weapon choices—is compatible with Kh-41/Kh-31 anti-ship missiles.

But the Su-33 proved slightly too big for comfortable mass-operation on Russia’s Admiral Kuznetsov carrier. More importantly, it lacked the full range of payload delivery features necessary to fulfill its purpose within Soviet naval aviation. Despite haphazard attempts to outfit it with anti-ship missiles, the Su-33 unmistakably remains an air superiority fighter. As with its Su-27 cousin, the fact that it cannot effectively fulfill ground-attack roles makes the Su-33 inherently unviable as a dedicated tool of littoral power projection and markedly reduces its operational value as Admiral Kuznetsov’s primary carrier-based fighter. It doesn’t help that the Su-33 comes with an archaic avionics package that cannot be meaningfully upgraded without a comprehensive refit plan.

In 2009, the Russian navy decided to replace the 30-35 Su-33’s that are currently in service with the competing, cheaper MiG-29K. In some ways, the transition from the Su-33 to the MiG-29K marks a technical downgrade: notably, the Su-33 boasts a significantly higher operating range and maneuverability. However, the MiG-29K is much more capable as a ground-strike and multirole fighter-- it boasts an expanded selection of standoff missiles and guided bombs. No less crucially, the MiG-29K is outfitted with electronic countermeasures (ECM) features, low observability technology, and a comparatively sophisticated Zhuk-M multifunction radar for significantly more robust ground-strike capabilities.

Some Su-33 fighters are reportedly in the process of being updated with a better engine, “improved detection system,” and other, unspecified changes to make it more viable as a multi-role fighter. The extent and timeline of that upgrade package remain unclear. The service future of the Su-33--and Russia’s naval aviation more broadly--is inextricably linked with Russia’s sole aircraft carrier, Admiral Kuznetsov, which is undergoing repairs and a deep refit on the heels of two catastrophic accidents over the past several years. Kuznetsov’s refit reportedly involves an improved and more reliable flight deck, capable of fielding the latest Su-33 and MiG-29K variants.