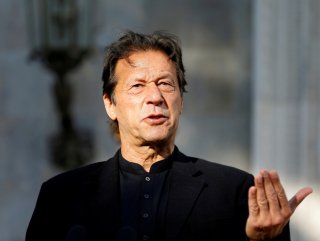 As the Taliban rampaged through Afghanistan last week, seizing one provincial capital after another, irate Afghans took to Twitter to protest Pakistan’s support for the militant group. Spearheaded by Canada’s former ambassador in Kabul, Chris Alexander, the hashtag #SanctionPakistan became a rallying point for those exasperated with Islamabad’s role in Afghanistan’s collapse.

Such demands are not new. U.S. politicians, including current Afghanistan special envoy Zalmay Khalilzad, have in the past proposed designating Islamabad as a state sponsor of terrorism. And they may grow even louder now that the Taliban has toppled the Afghan government and looks set to resurrect its emirate. The group’s rejection of liberal democracy and alliance with Al Qaeda and other terrorist organizations could trigger new calls for Pakistan to cut ties.

But sanctions will likely fail. No manner of economic pain would coerce Islamabad into ending its relationship with the Taliban. And, even if it did, the militant group has become increasingly self-sufficient and independent of Pakistani tutelage, a process culminating in the recent seizure of power in Kabul. The Taliban’s entry into government will limit Islamabad’s influence even more.

Sanctions are a prominent but not especially effective tool of U.S. foreign policy. Economic penalties have not driven the Venezuelan or Syrian leaders from power, they have not expelled Russia from Ukraine, and they have not forced North Korea to give up its nuclear arsenal. Nor did President Donald Trump’s “maximum pressure” campaign against Iran translate into meaningful Iranian concessions.

Sanctions have proven to be particularly useless in Pakistan’s case. The United States penalized Islamabad repeatedly for its development of nuclear weapons but failed to stop the testing of a Pakistani bomb in 1998. Since 9/11, periodic suspensions of military assistance, most recently by Trump in 2018, have not dented Pakistan’s support for the Taliban, Haqqani Network, and other militant organizations.

#SanctionPakistan has not specified what sanctions it would like to see: sweeping measures against Pakistani institutions, or more targeted instruments against nefarious intelligence officers? Too narrow, and the sanctions would have little impact; too harsh, and they could capsize Pakistan’s fragile economy and unleash a storm of unintended consequences, ranging from civil unrest to militant violence.

Sanctions are at their most effective when they are multilateral, but China—Pakistan’s “all-weather friend”—may well veto any measures at the UN Security Council. The United States would therefore have to go it alone, perhaps with the European Union in tow. Again, these aren’t subtleties that #SanctionPakisatan seems keen to consider. The campaign is more an outburst of rage than a rational attempt to change Pakistan’s behavior.

In any case, past experience shows that Islamabad won’t budge on issues deemed critical to its national security. As Robert Hathaway writes in The Leverage Paradox, “There is little in the historical record to support the contention that Pakistan can be bludgeoned into taking steps it believes dangerous to its security.”

The development of a Pakistani nuclear deterrent was seen as essential to warding off its arch-enemy, India. Supporting the Taliban was deemed necessary to minimize Indian influence in Afghanistan and prevent encirclement by New Delhi. This explains why sanctions have so far failed to alter Pakistan’s policies, and would likely fail again.

Moreover, Pakistan has in the past managed to cushion the impact of sanctions by relying on other countries. For example, when the United States sanctioned Pakistan after its 1965 war with India, it turned to Beijing for weapons. When U.S. military aid was cut after the annus horribilis of U.S.-Pakistan relations in 2011, which saw the Bin Laden raid among other episodes, Islamabad reached out to Russia and deepened ties with China.

Sanctions could not only backfire by driving Islamabad further into the arms of U.S. adversaries—no small thing given the size of Pakistan’s army and nuclear arsenal—they could also intensify the very problem they are supposed to prevent: support for militant proxies. A state reeling from sanctions has a greater incentive to use terrorist groups as tools of foreign policy, as they are less expensive than conventional military forces.

When Pakistan was under U.S. sanctions in the 1990s, it backed an array of militant outfits, including the Taliban, Lashkar-e Taiba, and other groups. Besides, Washington is unlikely to be receptive to #SanctionPakistan now. It has become increasingly reliant on Pakistan in its dealings with the Taliban and will likely depend on Islamabad even more as a diplomatic intermediary now that the insurgents have seized power.

Indeed, sanctions could undermine U.S. policy goals in the region. Pakistan would likely block American access to its territory in retaliation for such measures. That would prevent the United States from conducting “over the horizon” counterterrorism missions in Afghanistan, as there is no alternative to Pakistani airspace (Iran is obviously out of the question). So, if a major terrorist threat developed in Afghanistan, the United States would be powerless to stop it.

Even if sanctions had compelled Islamabad to cut off support for the Taliban insurgency, it would have made little difference to the militants’ fortunes. As the group seized more and more of Afghanistan, it no longer needed sanctuary in Pakistan, especially with U.S. airpower withdrawing and with it the threat of targeted airstrikes. And now that it is entering government, the movement doesn’t need to hide in Pakistan at all.

The Taliban was also financially self-sufficient long before its seizure of power. It has diversified its revenue streams to include not just narcotics but also mining and transit trade, along with taxes levied on local people and money from customs posts. It didn’t need Pakistani guns, either, given the amount of gear it seized from government weapons caches and the assistance of other states, such as Iran.

True, there have recently been reports of Taliban recruitment and training in Pakistan, and of wounded fighters receiving treatment in Pakistani hospitals.

But the Taliban has deliberately tried to reduce its dependence on Pakistan over the years. It established its political commission in Doha for that very reason. It also strengthened its ties to Iran, apparently opening an office in Tehran and receiving military advice from the Islamic Revolutionary Guard Corps (IRGC). There have also been reports of Russia arming and funding the militant group.

Islamabad has repeatedly struggled to influence Taliban decision-making. The government of former President Pervez Musharraf tried and failed to pressure the Taliban regime at Washington’s behest. After much arm-twisting, Pakistan forced the Taliban to the negotiating table in 2015, but couldn’t deliver any concrete results. A more recent attempt to cajole the group into attending a conference in Istanbul flopped.

The Taliban have come to resent Pakistan for its meddling. Multiple Taliban have reportedly been arrested and abused in Pakistani custody, hardly a recipe for a cordial relationship.

#SanctionPakistan would, therefore, have failed to halt the Taliban’s takeover and will not achieve anything going forward. Maybe the United States could have had better luck strong-arming Islamabad in the early years of the Afghan war when the Taliban was still heavily dependent on Pakistani support. But that ship sailed long ago. With the Taliban now in power, it no longer needs the patronage of Big Daddy in Rawalpindi.