Why Is Saudi Arabia Is Buying 4 Littoral Combat Ships From America? 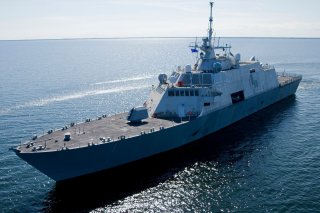 The MMSC is a variant of the Lockheed Martin Freedom-class littoral combat ship (LCS) that can be configured with a variety of sensors and weapons that help enable interoperability among U.S. naval forces and those of allied navies during joint operations.

The MMSC will haven an open-architecture design with a semi-planing mono-hull made of steel and an aluminum superstructure. Lockheed Martin will be able to build it in different sizes with a length ranging between 389 feet and 492 feet. It will be 58 feet wide, draw about 14 feet of water, and will displace 3,600 tons of water.

For ASW missions the ship will have the MH-60 helicopter and AN/SLQ-25 torpedo defense system. For the anti-aircraft role, the MMSC can have an eight-cell Mk-41 vertical launch system with 32 RIM-162 Evolved Sea Sparrow missiles (ESSM), long-range standard missiles, medium-caliber rapid-fire main gun, and CIWS.

For mine warfare, the ship can accommodate a remote multi-mission vehicle (RMMV). The ship also can support 20-millimeter remote guns on each side.

The MMSC will have combined diesel and gas engines, and will be able to operate as fast as 30 knots, even in high seas, with a range of 5,000 nautical miles.

On this order Lockheed Martin will do the work in Marinette and Beloit, Wis.; Washington; Baltimore; Moorestown, N.J.; Clearwater, Fla.; Salt Lake City; Pascagoula, Miss.; Fitchburg, Mass.; Hampton, Va.; and other locations, and should be finished by June 2026.