Why Securing Space Is So Crucial to America's High-Tech Military 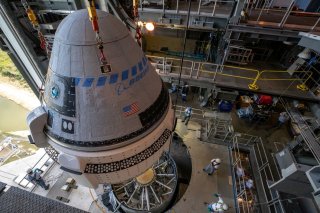 U.S. Army 155m artillery rounds can be put through a building window at 30km. Missile Defense Agency interceptors can take out enemy intercontinental ballistic missiles and Pentagon ground commanders can immediately learn of an enemy launch. Moreover, advancing soldiers can share targeting and navigational data across vast distances in real-time and America’s latest unmanned systems can autonomously perform missions. As if that weren’t enough, U.S. Air Force B-2 bombers can also pinpoint enemy air defenses with precision weapons from 50,000-feet and U.S. Navy ships miles apart can coordinate attacks across vast swaths of the open ocean. How are all these modern military capabilities possible?

To say the Pentagon is massively emphasizing space war would be an understatement. This focus has clearly emerged from its newly released 2020 Defense Space Strategy Summary. It is a text which, simply and directly put, emphasizes several straightforward concepts. America will prepare for space war, counter Russian and Chinese space weapons, leverage rapidly emerging commercial technology, and coordinate space war operations with allies. Finally, and perhaps of greatest significance, the Pentagon quickly engineer and deploy the most promising near-term space war innovations able to help the U.S. achieve and sustain space war superiority.

“The U.S. defense space enterprise was not built for the current strategic environment. The intentions and advancements of potential adversaries in space are threatening the ability of the United States to deter aggression, to protect U.S. national interests, and to fight and win future conflicts,” the Strategy states.

While the strategic document does mention North Korea and Iran, the text specifically calls out Russia and China as rivals who have made a priority out of preparing for space war, developing weapons and studying the U.S. space footprint. All of this calls several often-discussed things to mind, the first and foremost of which could be Russian and Chinese Anti-Satellite weapons; China used an ASAT weapon to shoot down a rogue satellite as far back as 10 years ago, and both Russia and China are known to be testing new generations of weapons to destroy U.S. Space assets.

Some of the more cutting-edge U.S. Space War initiatives include cloud migration and data pooling for satellite terminals and the development of multiple-kill vehicle ICBM interceptors. Furthermore, the military is exploring offensive and defensive lasers in space, arming satellites themselves with weapons and defenses, and engineering smaller, faster constellations of Very Low Earth Orbit satellites. Other priorities include hardening networks against jamming and interference and pursuing an integrated, multi-pronged series of space war tactics and strategies.

This strategic review includes several key, pertinent tenets, including redundancy, resiliency, dis-aggregation and weaponization. Redundancy is as it sounds, greater numbers of satellites helps ensure continued functionality in the event that some nodes are destroyed. Resiliency enables extended networking between constellations themselves and ground command and control centers. Resilience also means cyber-hardening space-reliant transmissions. Dis-aggregation is also vital because dispersed satellites can extend sensing envelopes and also help sustain operations if one area is damaged or destroyed by ASAT weapons.

The Pentagon’s new, next-generation Space-Based Infrared Sensors, called Overhead Persistent Infrared offer a particular technical example of how this strategy is being pursued. OPIR seeks to advance the curve in several key respects by speeding up detection and transmission to ground commanders, developing a more continuous data track across expansive geographical areas and detecting the heat signature of ever-smaller enemy missile launches. Resilience and networking, coupled with fast advancing sensor technology bringing higher resolution fidelity and longer ranges, comprise much of the current focus on OPIR. The Pentagon just awarded Raytheon an OPIR deal to engineer new sensor payloads for the program.

All of this emphasis falls within the widely recognized reality that, as the strategy paper writes, “DoD has limited operational experience with conflict beginning in or extending into space, despite rapid counterspace advancements by potential adversaries.”