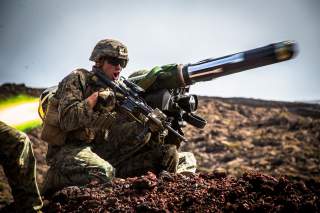 The wars of the last eighteen years have seen military technology and weaponry move forward in leaps and bounds. Integrated digital technologies, GPS guidance and drones have all come of age and been melded into the modern soldiers' equipment load, with more advances constantly promised.

While new developments have improved the capability and lethality of the armed forces as a whole, it is still with the “Poor Bloody Infantry” that a war is won on the ground. And the nature of the fighting that has been engaged in the Global War on Terror and the civil wars in Iraq and Syria means that one weapon has proven extremely useful in a role for which it was not actually designed—the anti-tank guided missile.

The issue is that modern anti-tank missiles are designed to destroy incredibly tough targets—main battle tanks. This means they are both exquisitely designed and incredibly expensive. The weapon manufacturers are adapting to the new use their wares are seeing by building models that feature multi-purpose warheads that are better suited to knocking out buildings or soft-skinned vehicles.

But this is still an expensive option.  According to Raytheon/Lockheed Martin, over 5,000 of their FGM-148 Javelin missiles have been used by US and Coalition forces in Afghanistan and Iraq. At a cost of US $174,000 per missile this is a major expenditure.

Although undeniably effective—and I speak as someone who has seen and much appreciates the Javelin in combat use—this seems like a case of too much of a good thing. But the ability to hit a point target at a range of a couple of kilometers, or even further, is definitely something the modern infantryman wants in his inventory.

I would suggest that instead of looking to the future for such a weapon, perhaps we should look to the past. Or rather, on applying modern materials and technology to old ideas.

A major part of the expense in modern missiles is the complexity of their guidance systems. While fire-and-forget systems may be the best option for engaging modern armored forces, they are not necessary for taking out an outpost or sniper in a building. An operator in the loop also gives the option of aborting a hit should circumstances change, such as civilians suddenly becoming apparent.

The first generation of guided anti-tank missiles in the 1950s used Manual Command to Line-Of-Sight (MCLOS) guidance. Basically, the operator used a joystick to guide the missile to its target. The issue with this was that such systems are difficult to master and required complex mechanical simulators to train the user.

These systems were replaced by Semi-Automatic Command to Line-Of-Sight (SACLOS). These are much simpler to use, requiring the operator to keep the crosshair in his scope on the target, the projectile then being guided by the computer in the launcher. This method is still extremely common in missiles in service currently, with the TOW, Milan and many Russian-made systems employing it.

An MCLOS system is a possibility. Although the technology was the cutting edge in the 1950s, it is now rather old hat, and electrical components are now more efficient, cheaper and far more resilient. This would make the building of these weapons, especially in large numbers as effectively a standard issue munition, extremely cheap. As in thousands of dollars, rather than hundreds of thousands.

The training issue would also be much easier to resolve today, as a basic computer program (or even a cell phone app!) could be made to teach soldiers how to guide the weapon. This would make qualification and refresher training extremely easy and cheap.

However, perhaps a better option is to look at the weapons that developed as the 1.5 generation of anti-tank missiles, which started as MCLOS systems and then were adapted to SACLOS guidance. Examples of this are the Soviet AT-3 and the French Harpon. It’s noticeable that the AT-3 is still used in the fashion described in this article.

These weapons featured the ability to swap warheads and a measure of missile launch standoff from the operator. These factors are particularly useful for the sort of weapon that is required today. A changeable warhead allows the infantryman on the ground to engage different targets with the most suitable option. HE/Fragmentation, Fuel Air Explosive and HEAT anti-armor warheads could all be simply be swapped as required on the missile body.

Standoff launch ability is also very desirable, and here I can give a personal example of the necessity. While working in Syria as part of a Kurdish sniper team, our position was engaged by a guided weapon. By talking to surrounding units and using our own knowledge of the battlefield, we were able to quickly determine the building from where we had been attacked. We then tore it apart with heavy caliber sniper rifle fire. We were not shot at again.

Standoff launch was standard on the first-generation MCLOS systems, with systems like the Swiss Cobra being able to be position eight missiles up to twenty meters from the operator. The SACLOS systems could not do this as the technology at the time required the system to acquire the missile rapidly after launch or else lose guidance.

But modern electronic systems are perfectly capable of compensating for this. In fact, off-the-shelf components and technology, such as Wifi and Bluetooth, offer the possibility of secure electronic communications between a guidance unit and a remote relay box that controls missiles.

The original missiles were also bulky and heavy, though man-portable. Sixty years of technological development has seen advances not just in electronics, but in materials, rocket propulsion and explosives. Combining all these factors offers the possibility of a small, cheap, precise extended range infantry weapon that is capable of use by the standard infantryman with minimal training on a range of potential targets.

In other words, exactly the sort of weapon that the current (and, let’s face facts, for the foreseeable future) conflicts require.

To cite the old maxim, Keep It Simple, Stupid.

Ed Nash has spent years traveling around the world. Between June 2015 and July 2016 he volunteered with the Kurdish YPG in its battle against ISIS in Syria; his book on his experiences, Desert Sniper, was published in the UK by Little, Brown in September 2018.