Why These Five Nations Are Joining Forces in the Pacific 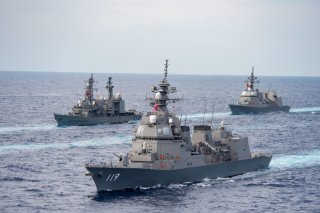 A five-nation naval force is on exercises in the Philippine Sea for ANNUALEX 2021.

The United States, Canada, Australia, and Japan participated together, unsurprisingly, considering those country’s history of military cooperation. One of the exercise’s most significant participants, however, was Germany.

End of a Two Decade Hiatus

Though the German contribution to ANNUALEX 2021 is modest, just a single ship, the frigate FGS Bayern, ends a nearly twenty-year absence of German naval involvement in the Pacific.

“While coordinated maritime engagements with international partners are part of routine presence operations for many navies throughout the Indo-Pacific,” the U.S. Navy statement reads. “ANNUALEX 2021 marks the first time in 20 years that the Germany Navy is participating in maritime exercises in the region.”

The U.S. Navy announcement also noted that Germany will send a frigate to the region on a biennial basis with a supply ship in tow.

A tweet by the Russian Mission to ASEAN explained that the exercise will be held “on December 1–3, 2021 within the Indonesian territorial waters off the coast of North Sumatera [sic],” and would include the Admiral Panteleyev, a Udaloy-class anti-submarine destroyer.

Though Russian participation with ASEAN is novel, involvement with the body is not new to the United States or China. ASEAN member states held exercises with the U.S. Navy in 2018 and 2019, and China in 2019.

The German commitment is a significant development in the country’s relationship with Asia. As Europe’s largest economy—and one heavily driven by exports to China—Berlin has been reluctant to upset the Berlin-Beijing relationship. Though a single frigate is a small physical commitment to the world’s largest ocean, it is a significant break from nearly two decades of German Pacific policy.