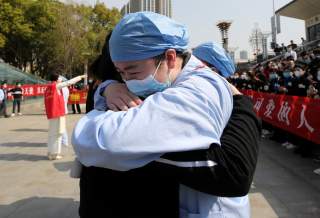 There is a bizarre tendency among the commentariat, especially in the media, to try to absolve U.S. competitors of mistakes or ills while applying a different standard to the United States. The latest involves the origin of the coronavirus. Journalists came down hard on Sen. Tom Cotton (R-Ark.) for listing a number of possibilities about the virus’ origin, including that it could have leaked from the Wuhan Institute of Virology.

I wrote at the time that, whatever its origins, the press did not know and China could not be trusted. Scientists have now conducted studies finding that coronavirus was natural in origin. “An analysis of public genome sequence data from SARS-CoV-2 and related viruses found no evidence that the virus was made in a laboratory or otherwise engineered,” the Scripps Research Institute found. Some health and science writers took that finding to try to shut down public debate as whether China bared responsibility for the outbreak. “Some folks including politicians in the U.S. and China have both suggested that the COVID-19 coronavirus (SARS-CoV2) that’s causing the pandemic may actually be a bioweapon that was manufactured in a lab,” Bruce Y. Lee wrote in Forbes, for example.

This misses the point. That COVID-19 was a genetically engineered weapon was always a strawman argument. Wuhan scientists collected viruses, including bat viruses, for study within the Wuhan Institute for Virology. The question Cotton is right to ask and journalists would also be wise to explore is whether the COVID-19 was introduced into a major population center because of sloppy practices in the laboratory, or because of deliberate sabotage by an aggrieved scientist. If the COVID-19 emerged passively from the Wuhan wet market, it does not explain why it did not emerge simultaneously in many of the other markets across China which purchased products from the Wuhan market.

There are other reasons why such scenarios should remain in the realm of investigation.

Historically, for example, there are corollaries. The 1980 anthrax outbreak in Sverdlovsk, for example, which began as a laboratory accident gone wrong but which many journalists at the time, following Moscow’s lead, dismissed as food poisoning. Ultimately, as the Soviet Union collapsed, Russian scientists acknowledged it really was a bioweapon accident. The “Yellow Rain” incident occurred around the same time, when the Soviet Union allegedly used a compound synthesized from mycotoxins in Southeast Asia and perhaps Afghanistan, as well. Journalists and analysts cast a great deal of doubt on the findings—largely out of fear of what the Reagan administration might do if it established proof that the Soviets had violated the Biological Weapon Convention.

There is also reason to doubt the efficiency of Chinese laboratory practices. The Wuhan Institute for Virology is not a peer to the National Institute of Health when it comes to best practices. Then there was the Chinese infant formula tragedy, when poor practices led to the deaths of six babies and the poisoning of 300,000 others. There was also the case of a Chinese factory worker who, upset about his wages, poisoned bags of frozen dumplings, sickening ten people.

More broadly, it is obscene that a country which has imprisoned over one million in concentration camps because of their religion and ethnicity, that regularly engages in slave labor, and which is responsible for, in the Cultural Revolution, perhaps the greatest mass murder of the twentieth century, be trusted.

Secretary of State Mike Pompeo is right that, regardless of how the virus emerged in Wuhan, the Chinese government is culpable in what has now occurred. It chose censorship over accountability and placed the image of China’s communist leaders above the health of millions worldwide. Nor is there any reason to treat Chinese Ministry of Foreign Affairs spokesman Zhao Lijian as anything more than “Beijing Bob,” this decade’s equivalent to “Baghdad Bob,” Saddam Hussein’s shamelessly lying information minister.

Meanwhile, journalists would be wise to remember just how almost any statement or explanation offered by the Chinese government and its paid scientist should lack any credibility or acceptance minus independent, international investigation.

Image: A local medical worker embraces and bids farewell to a medical worker from Jiangsu at the Wuhan Railway Station as the medical team from Jiangsu leaves Wuhan, the epicentre of the coronavirus disease (COVID-19) outbreak, in Hubei province, China March 19, 2020. China Daily via REUTERS.