Why Trump vs. Warren in 2020 Would Prove America Is in Decline 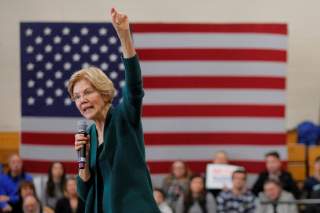 If a moderate cannot somehow prevail in the Democratic primaries, and President Donald Trump faces Senator Elizabeth Warren in the November election, then it will punctuate a process of slow and gradual American decline that began in the middle Cold War years. For the first time in modern memory, there would not be a candidate from the political center on any ticket. But it is possible that we will face a choice between the vulgar, populist right and the radical, populist left.

The fact that the center is having difficulty in the presidential race represents the culmination of a tragic story with several facets.

The steady adoption of a primary system to select party nominees in the 1970s and 1980s was something that weakened the leverage of party bosses in so-called smoke-filled rooms and played to the most partisan emotions of each major party. For decades the bosses had selected safe, moderate candidates: not always inspiring but usually responsible. It was the bosses who essentially gave us Harry Truman, Dwight Eisenhower, and so on. Eisenhower was scouted by the bosses of the Republican party while he was still in uniform. The system we have today might never have selected him. Though an exceptional analyst, organization man, and war hero, Ike wasn’t especially charismatic. Neither was he an especially compelling speaker or photogenic.

Smoke-filled rooms may sound squalid, but they fulfilled the spirit of the Founders of the American Revolution, specifically James Madison, who preferred a republic; not a democracy. In a republic, the masses rule only indirectly, through an elite that they can change every few years. Democracy means more direct rule, given to rage and passions, nowadays amplified by social media. Here is where the filter of the party bosses and the discipline of the print-and-typewriter age – which encouraged complex, analytical thinking from media organs dedicated to centrist objectivity – conveniently merged to guide us through the Cold War and keep us a republic.

Now think of our post–Cold War presidents chosen under different circumstances: Bill Clinton, George W. Bush, Barack Obama, and Donald Trump. Compare them against Truman’s shepherding of the Marshall Plan; of Eisenhower’s avoidance of a hot war with China and the Soviet Union, despite much of the advice he was getting; of Kennedy’s handling of the Cuban Missile Crisis; of Johnson’s Civil Rights Bill; of the elder Bush’s elegant restraint in the face of Soviet collapse and respect for limits in the case of Iraq’s invasion of Kuwait, and you’ll see what I mean. Of course, President Lyndon Johnson’s tragic decisions on Vietnam were an exception – and I’ll get to that.

Had the party bosses been in charge of the 2016 nominating process, and were the print-and-typewriter age still regnant, Governor Jeb Bush would likely be president, having narrowly defeated Senator Hillary Clinton, a candidate with more negatives than himself. He would have surrounded himself with first-rate foreign policy advisers from the Republican establishment: Richard Haass, Robert Zoellick, Meghan O’Sullivan, and so forth. He would have governed more like his father than his brother. Things would be so dull. So low energy! Yet, America, its alliances, and its posture in the world would be infinitely sturdier and wiser. Trump is where direct, mass democracy and the wonders of the digital-video age have led us. And these same factors may yet offer a Democratic opponent who threatens an economic and social upheaval to match Trump’s upheaval in manners and decency. The Founders would be horrified of how we have in spirit, stopped being a republic and have become a democracy. Someone like Jeb Bush was meant to govern the former.

The crumbling began after World War II, a war that however ghastly was very good for America. President Franklin Delano Roosevelt was still having difficulties mastering the solution to the Great Depression when the buildup to war jumped-started the American economy. When the war ended in 1945, the infrastructure of every major industrial economy in the world – save for that of the United States – had been devastated by aerial bombardment and ground fighting. It gave us an immeasurable advantage that would last for decades. The economic and social dynamism created by the war led to the G. I. Bill, the subsequent equalizing miracle of the suburbs, and consequently a new and vast middle class. Civil Rights, the erosion of casual anti-Semitism, and the Space program were all ultimately offshoots of the economic energy and social changes unleashed by the war effort.

Vietnam broke the spell. Until Vietnam, Americans had implicit faith in government and its decision-making processes. After all, the government had led us through World War II, created prosperity, and put men in space. But Vietnam fortified the intellectual Left and the elite media establishment as we know them today, giving them unlimited oxygen that would last for decades; with a second booster-injection provided by the debacle of the Iraq War, which the media and the intellectuals ably reported and commented upon. The country would never again be the same, and never as united as it used to be.

The Cold War, being a tailpiece of World War II, had provided a large measure of political discipline, though, extending the period of American greatness, however, shaken the country was because of Vietnam. Had we still been immersed in the Cold War during the election campaign of 2000, and had we still been a republic with party bosses choosing the nominees, the Republican elders might have gathered to gently tell the elder Bush that his son George W. was not quite ready for high office yet, and needed more time and experience: as a cabinet secretary, perhaps. But with two superpowers no longer facing off against the backdrop of nuclear Armageddon, all such discipline and common sense were lost. Because there was less to fear, almost anyone could now become president.

And without the vigilance demanded by the Cold War, extreme partisanship that undermines foreign policy carried fewer consequences. Politics no longer stopped at the water’s edge because the perception was it didn’t need to: for the world across the oceans appeared less dangerous than before 1989. Thus, the end of the Cold War heralded a hyper-partisan age in national politics.

Of course, many of these trends overlapped and there were always exceptions: the elder Bush made it through the primaries, a system newly strengthened by 1988, and John F. Kennedy was pitch-perfect for an electronic media age. Jimmy Carter was not an especially good Cold War president and Barack Obama was not an especially bad post–Cold War one. But while the details do not all fit neatly together, the underlying trend, like the brooding rhythm of a symphony, is clear.

Finally, we have had economic and technological changes around the world, as the infrastructure of all the major World War II powers recovered and globalization took root: severing American political unity and destroying the center in the process. The American middle class was fundamentally weakened, peoples’ lives became more precarious, even as a stylish, global elite located on the two coasts - and much less emotionally loyal to their compatriots in the Heartland - took root and oriented itself to other culturally sophisticated and high-income earners in Europe and Asia. In a crucial psychological sense, America lost its previously loyal establishment, which now lives a global lifestyle, whether its members admit it or not.

And with the elite establishment in the process of deserting its own country, nationalism and patriotism—which used to fit perfectly with liberalism—have been handed over to crude populists, many of whom in spirit constitute a lumpen proletariat. The 2020 election may yet threaten a choice between one crude populist and another.

An age of decline constitutes a golden age for the media, which thrives and builds careers on crises. Vietnam, Watergate, Iraq, and now the stark weakening of the moderate center have constituted great boons to journalists’ careers. Journalists are merely doing their jobs conscientiously. But their very fame and productivity are inversely related to the health and happiness of the nation.

World War II saved us because mass societies handle total wars well; just as they do small expeditionary warfare. It is middle-sized wars—Korea, Vietnam, and Iraq—which involve death on a significant scale, but do not engage the nation beyond military families, that mass societies handle less well. Heaven forbid there should ever again be a total war! But unless a moderate with real credibility can carry the day for the Democrats, only something extraordinarily fundamental can reverse our direction: on-going now for over half a century.

Robert D. Kaplan is a managing director for global macro at Eurasia Group. He is the author of “Earning the Rockies: How Geography Shapes America’s Role in the World” (2017).