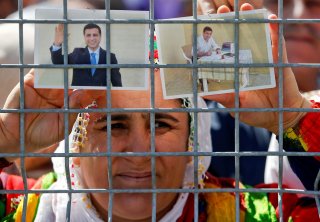 Turkey has begun to release about 90,000 prison inmates, half of them temporarily and the other half permanently, to prevent COVID-19’s spread and to ease overcrowding.

President Recep Tayyip Erdogan, his AK Party and their ruling coalition partner have excluded those who are charged with terrorism from the law allowing the releases.

In other words, the Erdogan regime is determined to keep in prison tens of thousands of academics, journalists, politicians, civil servants and others who did not commit any crime other than being affiliated with groups the regime sees as political threats.

Terrorism charges have been used to suppress the opposition in Turkey, particularly since the 2016 failed coup attempt against Erdogan and his subsequent purge against perceived political enemies.

Among those imprisoned on terrorism charges are Selahattin Demirtas, the previous leader of Turkey’s pro-Kurdish political party; Ahmet Altan, a world-renowned journalist and author; and Osman Kavala, a philanthropist and businessperson.

Some of those charged with terrorism have indeed perpetrated violent acts as members of the Islamic State of Iraq and Syria (often called ISIS), the Kurdish militant group PKK or the junta who attempted the 2016 coup.

But most of those imprisoned for terrorism are not even charged with a single violent act; they are accused of enabling the PKK, or being Gulenists, followers of the U.S.-based Turkish cleric Fethullah Gulen, whom Erdogan blames for masterminding the 2016 coup attempt.

The initial draft of the law would have released rapists and drug dealers. They were later excluded from release after public criticism surfaced. But the regime’s critics charged with terrorism were never considered for release, even in the drafts.

The state versus individuals

This policy is based on a historically consistent ideology, which has been embraced by most governments and even a large segment of society – that the Turkish state is much more important than individuals.

Using the risk of COVID-19 as an opportunity, the Turkish state with this move underlines the main purpose of prisons: They are meant to primarily punish the designated enemies of the state. Those who violate rights of individuals (by murdering or robbing them) can be regarded as less dangerous and even pardoned.

My 2019 book, “Islam, Authoritarianism, and Underdevelopment,” traces the origins of this state-centric ideology in the history of the Seljuk (1040-1194), Mamluk (1250-1517) and Ottoman (1299-1922) states, which left an ideological legacy to contemporary Turkey and most Arab countries.

Even late Ottoman reformists, who tried to import Western European ideas, did not challenge state-centricism and restrictions over individual liberties. The famous Reorganization Edict of 1839, issued by the Ottoman sultan and bureaucrats, guaranteed the protection of their subjects’ life, honor and property. But it did not even refer to their liberty.

The laws of modern Turkey have generally guaranteed individual liberties. Yet, its governments have constantly violated the citizens’ freedoms, especially those of religious (non-Muslim and Alevi) minorities and Kurds.

Erdogan and his changing allies

President Erdogan has dominated Turkish politics for the last 17 years. Since 2011, he has been powerful enough to define the citizens of his country as either friends or enemies of the state.

During the early part of his rule, Erdogan cooperated with followers of Gulen, certain Kurds and various intellectuals against secularist forces in the military and the judiciary.

During the Erdogan-Gulen alliance, prosecutors launched investigations against hundreds of this alliance’s political targets. And the courts played along with these probes, stretching the definition of terrorism so far that they even declared Turkey’s retired armed forces chief of staff, Ilker Basbug, a terrorist.

In the last six years, Erdogan gradually changed his allies because of his tug-of-war with Gulen and the popularity of being tougher against Kurds. Erdogan embraced ultranationalist secularists as political partners – the very group he had targeted earlier. This new partnership labeled all Gulenists, many Kurdish nationalists and numerous intellectuals as terrorists.

After the 2016 failed coup against Erdogan, 500,000 citizens were investigated for being members of terrorist organizations. Most of these investigations aimed to sentence Gulenists. Tens of thousands were imprisoned with such evidence as downloading a smartphone application used by Gulenists and having an account in a bank affiliated with Gulen. In 650 cases, imprisoned women are parents of children under 6 years old, so they live in jail together.

Turkey was particularly unprepared for COVID-19 due to the post-coup purge of about 150,000 civil servants, and specifically, 15,000 health care professionals. One of Turkey’s rare coronavirus experts, Dr. Mustafa Ulasli, was among those who were purged with the accusation of being a Gulenist. He lost his job and remains unemployed, despite his offers to help the Health Ministry with the crisis.

Globally, analysts have tried to explain possible political effects of COVID-19. One of the main questions is: Will it weaken or empower autocrats? The case of Turkey shows the complexity of COVID-19’s political consequences.

On the one hand, COVID-19 has deepened the Erdogan regime’s financial crisis. The Turkish lira has been losing its value against the U.S. dollar since 2018, and that trend continues.

Erdogan declared a US$15 billion stimulus plan on March 18. Because this was insufficient, he asked citizens to donate to a state-run aid campaign, which will financially help those who are affected by the measures against the pandemic, especially daily wage workers.

An important pillar of Erdogan’s regime is Diyanet – the government agency that controls all of the country’s 85,000 mosques and pay salaries to their imams. COVID-19 is further weakening the public reputation of the Diyanet, reflected in discussions on social media about why taxpayers’ money is still going to imams’ salaries though the mosques are closed.

On the other hand, a recent survey indicated that Erdogan’s approval rate has lately increased. During the COVID-19 crisis, many people may want to rally around the leader – in Turkey and across the globe.

In fact, Erdogan has tried to unify the nation around his personality during the crisis. He put his personal signature on the Turkish state’s COVID-19 care packages distributed nationwide. He also declared that only the central government was authorized to collect money for COVID-19 aid purposes; the interior ministry blocked the charity drives of opposition-run municipalities.

During the COVID-19 crisis, it is crucial for Erdogan to control the media in order to minimize criticisms of his policies. Otherwise, his ineffective responses to the crisis may lead to a growing opposition. Hence, Erdogan wants to keep many journalists and other critics in prison.

When faced with COVID-19, the Turkish state repeats what it knows best – the state is more important than individuals. Erdogan and his allies have even created new ways to demonstrate this: For them, the regime’s critics are more dangerous than violent criminals.