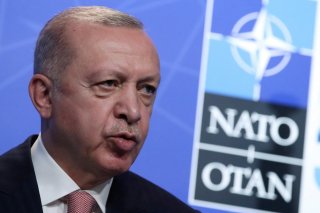 In his pre-election pitch, President Joe Biden proclaimed the role of the United States is to champion freedom and democracy and that NATO is the bulwark of the liberal democratic ideal: an alliance of values.

This was clearly demonstrated by two events. First, when the United States took the lead at the recent meeting of NATO and non-NATO countries at the Ramstein Air Base in Germany. Second, when Congress overwhelmingly voted in favor of the Ukraine Democracy Defense Lend-Lease Act of 2022 and Biden signed it into law.

Against this backdrop, Turkey, formerly a staunch NATO member, is the odd man out. In fact, when Biden held his Summit for Democracy in December, Turkey was excluded.

Biden has made no bones about it. Much to Turkey’s chagrin, on Armenian Remembrance Day (April 24), Biden commemorated the one and a half million Armenians who were deported, massacred, or marched to their deaths in the Ottoman-era genocide.

In April, the State Department published a comprehensive ninety-three-page report on human rights abuses in Turkey under President Recep Tayyip Erdogan’s AKP (Justice and Development Party) government and the subjugation of the rule of law to politics.

Countering America’s Adversaries Through Sanctions Act sanctions have already been imposed on Turkey because of its purchase of the Russian S-400 missile defense system and it has been removed from the F-35 joint strike fighter program for the same reason. Therefore, it is incomprehensible that the State Department should argue that there are compelling long-term NATO  interests that support the sale of forty F-16 fighter jets and nearly eighty modernization kits to Turkey.

Such a move flies in the face of U.S. strategy in the region. When Secretary of State Antony Blinken calls for the sale to be expedited, the confusion is complete. The United States has already thanked Turkey for its role in the prisoner swap of Trevor Reed, but there is no need to get carried away in the afterglow.

With regard to Ukraine, Turkey has tried to have its cake and eat it too. It voted for the UN resolution condemning the Russian invasion and has blocked the Bosporus apart from the return of Russian warships to the Black Sea. It has also closed its airspace for military transports to Syria. But Turkey’s attempts to mediate between Russia and Ukraine have not been successful.

However, the idea by some members of Congress of making the F-16 sale contingent on Turkey’s support for Ukraine belongs to the realm of wishful thinking. As the chairman of the Foreign Relations Committee, Bob Menendez, has made clear: “I think the administration has to stop seeing from the aspirational part of what we would like Turkey to be and realize that Turkey is under Erdogan.”

Turkey is dependent on Russia for trade, gas, the construction of a nuclear power plant, and for its occupation of various areas of Syria. It also bases its hope for a record tourist season on the influx of Russian tourists. For example, Turkish Airlines has allocated 1.5 million seats for Russians. At the same time, Russian oligarchs flock to Turkey to fill their depleted coffers.

So, it is unlikely Turkey will rock this boat.

Facing next year’s elections, Turkey’s Erdogan is groggy and a man on the ropes. His approval rating has dropped to 42 percent, and 59 percent of Turks don’t think he can fix the country’s financial woes. This rises to over 90 percent among supporters of the opposition parties.

This has resulted in conciliatory moves by Erdogan towards former rivals such as Saudi Arabia, the United Arab Emirates, and Israel. For example, on a visit to Riyadh, Erdogan embraced Saudi Crown Prince Mohammed bin Salman, whom he had earlier accused of being behind the butchering of dissident Jamal Khashoggi in Istanbul.

Steven A. Cook in a trenchant analysis of the Middle East’s “kumbaya moment” found the visit “the geopolitical version of going hat in hand hoping for some investment from enormous Gulf sovereign wealth funds.”

Nor are the Israelis easily fooled. Herb Keinon has called for the “real Erdogan to please stand up.”

But what does Congress think these fighter jets will be used for? On Friday U.S.

Under secretary of state for political affairs Victoria Nuland found Turkey’s violations and flights over Greek islands “provocative.” Athens has registered 168 airspace violations and forty-two illegal overflights on a single day in April.

Also in April Turkey carried out maneuvers involving 122 ships and forty-one aircraft in support of its “Blue Homeland” maritime doctrine. Turkish defense minister Hulusi Akar addressed commanders and stated that Turkey was always in favor of good neighborly relations and wished to solve current disputes through peaceful means and methods.

He also claimed that Greece had armed sixteen of its twenty-three Aegean islands in violation of international agreements and called for dialogue. “Our goal is to share all the riches of the Aegean Sea fairly, and the Aegean Sea is a sea of friendship.”

In a comment on Washington’s “crackpot” deal with Turkey to fight ISIS, columnist Conn Hallinan concluded, “Anyone who believes the “moderates” will take over should consider unicorn hunting as a profession.” The same applies to anyone who thinks that Turkey will abandon its close relations with Russia in favor of toeing the NATO line.