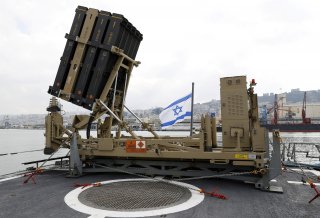 A crack has appeared in Israel’s Iron Dome missile defense system, after the U.S. military gave it a thumbs-down.

“It took us longer to acquire those two batteries than we would have liked for a lot of different reasons,” Murray testified. “We believe we cannot integrate them into our air defense system based upon some interoperability challenges, some cyber [security] challenges, and some other challenges. So what we ended up having is two stand-alone batteries that will be very capable, but they cannot be integrated.”

“My assessment right now is, it would be — and I hate to ever use the word ‘impossible’ — but exceptionally difficult to integrate Iron Dome into our layered air defense architecture [and] to get Iron Dome talk to other systems, other radars, specifically the Sentinel radar,” Murray told a reporter for Breaking Defense. “What you’re probably — almost certainly – going to see is two standalone systems, and if the best we can do is standalone systems, we do not want to buy another two batteries.”

The Pentagon was miffed that Israel has not allowed full access to Iron Dome software. “Army officials reportedly requested the ‘source code’ of the Iron Dome from Israel, which supplied engineering information but refused to provide the code detailing how the system works – a necessary component to integrate the two countries’ defense systems,” according to the Jerusalem Post.

The U.S. Army is revitalizing its air defense systems – which have languished since the Cold War – in light of threats from Russian and Chinese ballistic missiles as well as drones fielded by numerous nations. Key to this effort is an integrated approach that combines air defense weapons, sensors and command systems. If Iron Dome can’t be linked to other U.S. defense systems, then its utility is limited.

Iron Dome – partly funded by American military aid to Israel -- was conceived in the early 2000s as a way to protect Israeli towns from Hezbollah and Hamas rockets. Israeli manufacturer Rafael partnered with American defense contractor Raytheon to sell it to the U.S. military.

However, American and Israeli critics have questioned whether Iron Dome is as effective as Israel claims. But the Pentagon also worries that Iron Dome might not function so well outside Israel. “Iron Dome’s a good system,” U.S. Army acquisition chief Bruce Jette said at a recent conference. “It’s designed really well to do what it does –  which is [to counter] rockets, artillery, and mortars, in a particular configuration, in a particular environment.”

Yet other U.S. commanders seem to wish they could have more Iron Domes, after pro-Iranian militias in Iraq killed two Americans and one Briton in a rocket attack on Camp Taji, Iraq, on March 11th. “We know that Iron Dome has a combat-proven capability,” Lt. Gen. Daniel Karbler, head of Army Space and Missile Defense Command told Army Times. “I’ve got to assume that it would have worked, given it was in the optimal state of readiness as well as positioned to defend that particular asset.”

The more interesting question is what this means for missile defense overall. Whatever its merits or flaws, Iron Dome is the most combat-tested defense system of its kind. It has become the poster child for missile defense, offering the dream that soldiers and civilians can be protected not just from ICBMs, but also from tactical rockets and mortar shells.

The Army’s thumbs-down on Iron Dome may puncture that dream.

Michael Peck is a contributing writer for the National Interest. He can be found on Twitter, Facebook. or on his Web site. This article first appeared last month.