Why U.S. Engagement in Libya Is Critical for Strengthening NATO 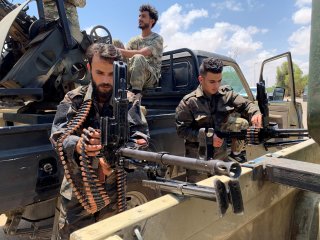 A French naval vessel enforcing the UN arms embargo on Libya was nearly involved in a skirmish with the Turkish navy on June 10. The French frigate Courbet sought to pull over a cargo vessel it suspected of smuggling arms into Libya; Paris claims that Turkish ships then targeted the Courbet with their weapon systems. Though both Turkey and France are NATO members, they exchanged heated criticism over the incident, highlighting how the fight for the future of Libya has strained the seventy-one-year-old alliance. It is unlikely that any NATO member other than the United States can correct this dangerous course—an effort that will require pushback against the ambitions of individual NATO members, particularly Turkey.

Ironically, NATO leaders once lauded the 2011 UN-backed NATO intervention in Libya as a demonstration of the alliance’s new role in the post–Cold War era. Then-Secretary General of NATO Anders Fogh Rasmussen praised the operation as offering a “template for future NATO missions,” while U.S. Admiral James G. Stavridis, then serving as NATO’s top commander, opined that the intervention in Libya “demonstrated that the alliance remains an essential source of stability.” Things quickly soured after 2011, however, and Libya, once a potentially unifying and reaffirming chapter for NATO, now threatens to tear it apart.

From the fall of Muammar el-Qaddafi onwards, Libya devolved into a civil war, and the country is now torn between the opposing forces of the UN-recognized Libyan Government of National Accord (GNA) based in Tripoli and General Khalifa Haftar’s self-styled Libyan National Army (LNA), based in eastern Libya. The proxy nature of the conflict makes it even more complicated. Russia, Egypt, and the UAE back the LNA, while Qatar bankrolls the GNA as Turkey provides significant military support. The role of Turkey does not enjoy NATO sponsorship and is further complicated by France’s subtle backing of Haftar, which plays out through diplomatic support for the LNA while calling for a cease-fire in a bid to remain relevant in the region. Italy, meanwhile, a critical NATO player in the Mediterranean region, has taken the diplomatic side of Turkey and the GNA.

Absent from the discussion of Libya’s future is the United States, which might explain the divisions within NATO. Just as NATO intervened in Libya at the behest of Washington, it is unlikely that the quagmire of alliances and rivalries can be fixed without Washington’s help.

The United States’ absence in Libya means that NATO members not only lack unity but quarrel with each other. France had particularly scathing words for Turkey following the Courbet incident in June. Although the incident passed without any fighting, France commented that it “can’t pretend there isn’t a Turkey problem at NATO,” and opted to suspend its critical role in enforcing the arms embargo on Libya.

The French are correct, even if their actions are not above criticism: Turkey is the greatest obstacle to restoring NATO unity on Libya. Recep Tayipp Erdogan’s support for the GNA stems mainly from his increasingly militant and Islamist foreign policy and his rivalry with Egypt, not any interest in promoting democracy. Rather than calm the situation, Ankara’s conduct in Libya has caused a dramatic increase in drone warfare alongside the export of Syrian Islamist troops to Libya, some of whom are child soldiers.

If the United States is to use its influence to unify NATO around a common purpose in Libya, then it will require curtailing Ankara’s efforts to call the shots. Erdogan’s democracy-busting actions at home should give pause to any observer when considering what kind of country he seeks to turn Libya into. Instead of granting Erdogan relative impunity for his misconduct as it has in Syria and Iraq, Washington and NATO must demand that Turkey conform to the values of the trans-Atlantic alliance before it gets more involved in Libya.

In addition to advocating for a unified NATO policy, Washington should also use its influence to sponsor a peace settlement in Libya. Aided by America’s unwillingness to get more involved in Libya, Ankara and Moscow have sidelined Washington and its Western allies and tried to broker Libya’s future on their own terms. If Washington were to put its weight behind a peace settlement in Libya, then it could reaffirm its prowess in the diplomatic sphere and unify NATO around a single vision for the war-torn nation.

The inability of NATO members to find common ground in Libya is having ramifications that are only now being understood. The French retreat from the United Nations mission off of Libya’s shores, known as Operation Sea Guardian, will diminish maritime security in the Mediterranean region. Meanwhile, Turkey is blocking the implementation of a critical Baltic defense project that it had already agreed to support last year. The project is a key element of NATO’s strategy for countering Russian influence in Eastern Europe. Ankara’s conduct not only risks alienating NATO members in Eastern Europe but also potentially threatens their security.

Should the Libya problem continue to go unresolved, there is no telling how much damage it will cause to the trans-Atlantic alliance. Washington must make its presence felt. Libya may be tearing NATO apart, but it also offers the alliance a chance to once again renew its purpose.

Philip Kowalski is a foreign affairs analyst based in Washington, DC. He currently works at the Foundation for Defense of Democracies (FDD) and has written essays on international affairs for the Washington Kurdish Institute, OZY and the Middle East Institute, where he was a research assistant in 2019. He completed his MA at the University of London’s School of Oriental and African Studies, with a thesis on “Reurbanization in Post-Genocide Southeastern Turkey (1925–1940).” Prior to attending graduate school, Philip lived in Turkey between 2012 and 2016. He holds a BA in History from the University of Cincinnati.