Why the U.S. Marine Corps Wants to Turn Its Trucks Into Tank-Destroyers 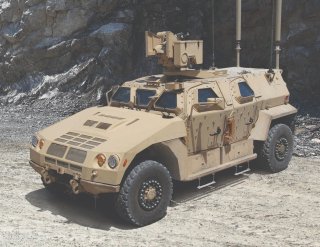 The Marine Corps is architecting a highly-lethal lightweight tactical vehicle armed with armor-destroying weapons that can reach enemy targets as far as fifteen to twenty times the range of an Abrams tank.

The plan is to potentially create a lighter, faster, more agile Marine Corps able to find and destroy enemy armored vehicles, such as tanks, without having to deploy heavy tanks.

“We can kill armor formations at longer ranges using additional and other resources without incurring a 74-ton challenge trying to get that to a shore, or to get it from the United States into the fight,” Lt. Gen. Eric Smith, deputy commandant for combat development and integration, said in a USNI report. “You simply can’t be there in time.”

Part of the plan includes the use of “lightweight mounted fires” on fast-moving tactical vehicles, a scenario which could involve arming the Joint Light Tactical Vehicle (JTLV) with anti-tank missiles or other precision anti-armor weapons. This makes a lot of sense, given longstanding concerns about tank mobility and deployability. While the tried and tested Abrams tank is combat proven and not likely to disappear anytime soon, it does operate with certain limitations such as an inability to cross certain bridges, slower speeds, logistical challenges with high fuel consumption and, perhaps most of all, an inability to conduct rapid-deployment expeditionary warfare.

Such a prospect could include firing Javelins, TOW missiles, Stingers, or even HELLFIRE missiles from tactical vehicles on the move, attacking enemy tanks at far longer ranges than tank rounds or standard vehicle cannons and guns can reach. The Styker is already doing this with the SHORAD, or Short Range Air Defense, program, which now arms vehicles with HELLFIRES, Javelins, and Stingers to take out enemy drones, helicopters, and air threats.

Configuring tactical vehicles such as a JTLV with anti-tank weapons may require additional components of fire control support and recoil absorption. Yet with proper integration it may indeed be entirely possible. Army Humvees were armed with Avenger missiles, and there have been other vehicle-mounted weapons such as HIMARS or rockets put on tactical trucks.

Perhaps with these kinds of dynamics in mind, U.S. Navy and Marine Corps leaders are also discussing additional combat applications associated with arming tactical, mobile vehicles with heavier, longer-range weapons. Such a strategy might prove to be of particular relevance for maritime warfare operations, such as amphibious attack or coastal combat engagements. For example, “lightweight mounted fires” could be used as “ground-based anti-ship missiles that Marines could use to push enemies back hundreds of miles from a contested piece of land,” USNI reports.

At the same time, while tactical vehicles armed with anti-armor weapons could clearly change the equation regarding fast-paced expeditionary land attack, particularly in coastal or island areas, there is still very much a place for heavy armor when it comes to land warfare. At a certain point, there will be a need to “close with the enemy” in closer proximity, thereby exposing forces to enemy fire. For those types of scenarios, it can be difficult to replicate the survivability of a heavily-armored Abrams tank. Also, by its mere presence, an Abrams can perform a certain kind of psychological deterrence by demonstrating massive force and firepower. This is one of many ways the Abrams proved itself worthy in counterinsurgency, as it functioned as a deterrent against small groups of would-be attackers targeting convoys with RPGs and other weapons.