Why the U.S. Military is Required to Buy American-Made Firearms 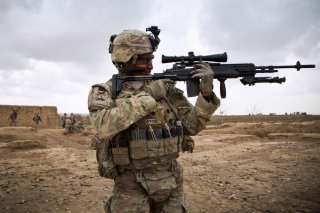 Both the Union and Confederate armies utilized large numbers of the British-made Enfield Pattern 1853 rifle-musket during the Civil War. In fact, it was the second most common infantry weapon in the war, surpassed only by the Springfield Model 1861 rifled-musket. It marked the only time in U.S. military history that a large number of American soldiers had to rely on a foreign-made weapon.

Just three decades later there was even controversy when the Norwegian-designed Krag–Jørgensen was selected to be the main infantry rifle and carbine of the United States Army. When the contract was awarded in August 1892, initial production had to be deferred due to protests from domestic manufacturers. Two rifle designers even sued the U.S. government in response.

Today, the U.S. military is all but required to use domestically-produced firearms due to the Buy American Act (BAA) of 1933. It requires the federal government to buy American–made iron, steel, and manufactured goods wherever possible. According to the act, a product is defined as American–made “if at least 50 percent of its constituent parts and/or materials originated in the United States.” Since 1933, several additions to that policy have been enacted, and a body of policy, procedure, and case law has developed.

The United States military has indeed used some foreign-made equipment over the years, which can be confusing in light of the BAA. However, small arms—including rifles and handguns—usually need to be produced in the United States.

Even the components and materials must be domestically produced. According to the Congressional Research Service report from earlier this year, under the specialty metals restrictions, DOD generally may not acquire certain military platforms or weapons systems—or components of these platforms and systems—that contain any amount of a specialty metal that was not melted or produced in the United States.

When the U.S. Army sought to replace the Colt M1911 .45 pistol in the 1980s and selected the Italian-made Beretta 92FS—designated the Beretta M9—as the service pistol, it still required that the bulk of the production was done in the United States. The Italian gunmaker has been manufacturing firearms for the American market ever since, and in 2016 even opened a new facility in Tennessee.

In an effort to better compete for U.S. military small arms contracts, the Czech-based Česká zbrojovka Group (CZG) acquired world-famous American gunmaker Colt Manufacturing earlier this year. Prior to the acquisition of Colt, about 66 percent of CZG's sales still came from the United States. That included contracts with law enforcement as well as consumer sales in the civilian market. By owning Colt, CZG can now enter its firearms in U.S. military procurement competitions. As a result, the future may again see an American-made Colt—albeit one designed in Prague—firearm used by future American warfighters.