Why the U.S. Military Is In Serious Trouble 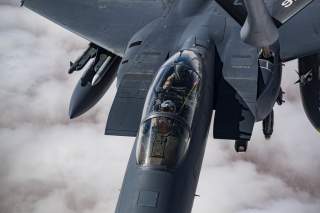 The report of the National Defense Strategy Commission, released Wednesday, reaches conclusions with profound implications for U.S. national security. The report itself is a rarity for Washington, presenting bipartisan consensus that reflects hard-hitting views rather than watered-down, lowest-common-denominator mush.

In sixty-four pages of plain language, the commission paints an extraordinarily troubling picture of the state of U.S. national defenses, calling our present situation a “grave crisis” demanding “extraordinary urgency.” It’s a call we should heed.

The 2017 National Defense Authorization Act authorized a commission to “examine and make recommendations with respect to the national defense strategy of the United States.” The commission members are all national security experts, half selected by Republican and half by Democrat leaders of the House and Senate Armed Services Committees. The bipartisan structure gives the commission’s findings particular weight and credence.

In general, the commissioners agree with the administration’s National Defense Strategy (NDS) published this in January 2018. The strategy focused largely on great power competition and stressed the importance of alliances, increasing readiness and achieving Pentagon reforms.

However, after identifying those areas of agreement, the report proceeds to describe some significant shortfalls with the strategy and the supporting resources and concepts. In a key passage, the commissioners express skepticism that the Defense Department “has the attendant plans, concepts and resources needed to meet the defense objectives established in the NDS.”

The report notes that the United States now faces five rising challenges—China, Russia, Iran, North Korea, and transnational terrorism—yet has fewer military forces than at any time since the end of World War II. “Simply put,” it observes, “the United States needs a larger force than it has today if it is to meet the objectives of the strategy.”

Numerous defense experts, both inside and outside of government, have been telling us the same thing for years. Today, the navy says it needs 355 ships to execute the NDS; they have 286. The air force says it needs 386 squadrons; they have 312. And the army states it needs 500,000 active soldiers; it has only 476,000.

With five potential adversaries to account for, the report observes, a “two-war force sizing construct makes more strategic sense today that at any previous point in the post-Cold War era.” Yet the NDS used only a one-war force sizing construct with an additional undefined ability to “deter” another opponent. Essentially, that construct provides no capability to deter an opportunistic adversary who sees the U.S. engaged in one regional conflict. Moreover, it provides no ability to suffer combat losses or to maintain any forward presence in any area other than the conflict zone.

In sum, the NDS’ one-war force sizing construct understates the amount of forces the U.S. needs to prevail. The commission does not approve.

The commission is unsparing in its description of how inadequate the resourcing is for national defense: “the available means are clearly insufficient to fulfill the strategy’s ends.” The report points to the cumulative impact of the Budget Control Act of 2011, which effectively removed $539 billion from the Pentagon budget, causing a series of cascading ill effects on readiness, modernization and force size.

This assessment is spot on. In 2017, Defense Secretary Jim Mattis testified that, to rebuild the military to necessary levels, the defense spending would need to see sustained real growth of 3-5 percent annually. Yet the projected defense budget fell well short of that goal—even before President Trump announced the Pentagon’s FY 2020 budget would take a 4.5% cut.

The report concludes, ominously but wisely, that “if the United States does not adequately fund its military now and in the future, it risks forfeiting any near-term financial savings with vast long-term costs in blood, security and treasure.”

The commission comes down strongly in favor of forward-based forces. It recommends that the army return a heavy division to Europe with a corps headquarters. It also urges establishing a more robust defense-in-depth in the Indo-Pacific.

The commission wisely picked up on the NDS’ failure to flesh out its strategy for confronting China and Russia. Operational concepts, the report notes, “constitute an essential link between strategic objectives, defense policy, and budgetary priorities, and they are sorely lacking in the NDS.” It’s a subtle point that reflects the remarkable depth of the commission’s analysis.

Readiness also caught the commission’s eye. It has suffered, the report observes, due to “unfettered high demand on a smaller force, persistent budget uncertainty and inadequate funding.” Yet clear assessments of readiness are hard to come by. To remedy this, the commission recommends that the Pentagon “develop analytic tools that measure readiness across the range of challenges from low-intensity, gray zone conflicts to protracted high intensity fights with major power rivals.”

The report addresses modernization of the U.S. nuclear deterrent, as well. It says that “all legs of the triad, as well as much of the supporting infrastructure approaching the ends of their service lives, nuclear modernization must receive sustained and predictable funding from Congress.”

That’s sound advice. But following it will be challenging, given the current defense funding picture.

A Difficult Pill to Swallow

In the end, the commission’s report brings but little good news. Rather, it paints a sobering picture of the state of U.S. national defense and the military’s ability to execute the NDS. But, despite the bitterness of the medicine, it’s a prescription that’s needed.

The commissioners and staff should be commended for producing an accurate and thoroughly candid assessment.  Everyone with an interest in national security should read this report. In the coming months and years, necessary debates will be had on the relative priorities of defense funding versus other needs. For those seeking to the truth about our defense needs, the NDS Commission’s report should serve as an authoritative reference.

The report concludes that “America has reached the point of a full-blown national security crisis.” It’s a wake-up call that needs to be heard. Unheeded, one of the report’s most chilling statements could come to pass, “put bluntly, the U.S. military could lose the next state-versus-state war it fights.”