Why the U.S. Navy Loved the Midway-Class Aircraft Carrier (For 47 Years) 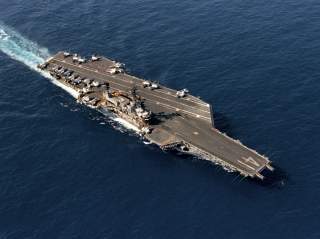 The Midway-class was meant to be a beefier battle carrier” compared to the twenty-four Essex-class carriers that entered service in the latter half of World War II. Naval engineers particularly sought to introduce an armored flight deck. British carriers with armored decks proved more resilient and quicker to recover from dive bombing and kamikaze attacks that crippled U.S. flattops. But armored flight decks were also considerably heavier, limiting deck size and number of aircraft carried.

The class missed action over Korea, though Midway did assist in evacuating thousands of Chinese Nationalists in the wake of the Battle of Yijiangshan island. The three Midway-class carrier finally saw combat in Vietnam, by which time two-seat F-4B Phantom II fighters capable of flying twice the speed of sound were catapulting off their flight decks.

A year later on June 20, 1966, four Midway-based A-1H Skyraiders, old-fashioned piston-engine ground attack planes, were on a search-and-rescue mission when they were warned of two approaching MiG-17s. The Skyraiders flew in circles hugging the side of a mountain for cover. The MiGs swooped down spitting cannon shells at the lead Skyraider—but the two A-1s behind him pulled up and raked the jets with 20-millimeter cannons, shooting one down in one of the unlikelier kills of the conflict.