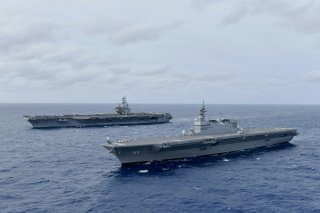 The U.S. Pacific Fleet reported that the Nimitz and Ronald Regan Carrier Strike Groups have been conducting dual-carrier operations in the Philippine Sea—and warships and aircraft assigned to the CSGs began coordinated operations in the international waters last week. The exercises coincided with similar drills conducted by the Chinese People's Liberation Army Navy in the region.

“We aggressively seek out every opportunity to advance and strengthen our capabilities and proficiency at conducting all-domain warfighting operations,” said Rear Adm. George Wikoff, commander Carrier Strike Group 5. “The U.S. Navy remains mission-ready and globally deployed. Dual carrier operations demonstrate our commitment to regional allies, our ability to rapidly mass combat power in the Indo-Pacific, and our readiness to confront all those who challenge international norms that support regional stability.”

Last month, USS Nimitz (CVN-68) Carrier Strike Group, CSG-11, which is part of the U.S. Navy’s 3rd Fleet and coordinates with the U.S. 7th Fleet to conduct missions, began its deployment. At the same time, USS Ronald Reagan (CVN-76) departed from its homeport in Yokosuka, Japan and began a CSG patrol in the region—and embarked with Carrier Air Wing 5 based at Marine Corps Air Station Iwakuni.

The two CSGs are conducting integrated exercises and operations that maintain responsive, flexible, and enduring commitments to mutual defense agreements with allies and partners in the Indo-Pacific region. U.S. Navy aircraft carriers have conducted similar dual carrier strike group operations in the Western Pacific, including the South China Sea and the Philippine Sea in recent years. These operations typically occur when strike groups deployed to 7th Fleet from the West Coast of the United States join 7th Fleet’s forward-deployed carrier strike group in Japan.

“Only the U.S. Navy can integrate a carrier strike force on this scale and consistently project power to protect freedom of the seas,” Rear Adm. James Kirk, commander of the Carrier Strike Group 11, said. “With more than ten thousand U.S. Navy Sailors from across the world working together as one cohesive team, these operations are what keep us ready to respond to any contingency.”

The dual-carrier operations are a response to the drills that Beijing announced on July 1 that were to occur near the Paracel Islands, which are currently claimed by both Vietnam and China. Vietnam, along with the Philippines, has criticized the planned Chinese drills and warned that the exercises could create tension in the region and impact Beijing’s relationship with its neighbors, NBC News reported.

These are just the latest exercises that the PLAN has conducted in the region. In April, China’s Liaoning aircraft carrier task force took part in its first major exercise in the South China Sea after suspending drills in March due to the outbreak of the novel coronavirus. Warships from the PLAN’s 35th Escort Task Group also took part and conducted anti-piracy and live-fire training drills.

The region remains a flashpoint, as Brunei, Malaysia, the Philippines, Taiwan and Vietnam all lay claim to parts of the South China Sea, through which about $3 trillion of trade passes each year.