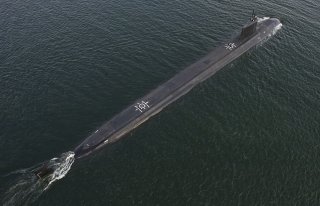 They can destroy major land targets from as far as nine hundred miles away, hit moving enemy ships at sea, attack submarines and surface vessels with torpedoes and increasingly, they can conduct clandestine “spy missions” near enemy shores. These are all reasons why the Pentagon and Navy are looking to massively accelerate the production and delivery of more new Virginia-class attack submarines.

The Pentagon’s emerging Battle Force 2045 plan calls for as many as eighty attack submarines, as part of a sweeping effort to architect a fleet as large as five hundred ships.

The plan, unveiled in recent months, represented the culmination of lengthy studies and wargames specifically looking at the emerging global threat circumstance, specifically emphasizing the pace of growth with the Chinese Navy.

Battle Force 2045, according to former Secretary of Defense Mark Esper, calls for a more balanced Navy of over 500 manned and unmanned ships, with the goal of reaching 355 traditional ships before 2035. The initiative includes more destroyers, cruisers, amphibious, drone boats, and, most of all, more submarines.

“Under our proposal, Battle Force 2045 will possess the following characteristics. First, a larger and more capable submarine force. The study reached a clear consensus on the need to rapidly increase (our number) of attack submarines, the most survivable strike platform in a future great power conflict, to the range of 70 to 80 in the fleet,” Esper said in October, according to a Pentagon transcript.

As for the way to get there, Esper called for a multi-pronged path to include building three new Virginia-class attack submarines per year as opposed to previous plans to build two, refueling a Los Angeles class submarine and investing in a new SSN(X), next-generation attack boat for the 2030s.

Part of the Pentagon’s rationale for adding more attack submarines can likely be found in the fast-expanding mission scope possibilities for the boats, which can not only attack but also increasingly conduct reconnaissance missions.

The U.S. Navy’s 2018 “Commander’s Intent for the United States Submarine Force,” writes - “We are uniquely capable of, and often best employed in, stealthy, clandestine and independent operations . . . we exploit the advantages of undersea concealment which allow us to: Conduct undetected operations such as strategic deterrent patrols, intelligence collection, Special Operations Forces support, non-provocative transits, and repositioning,” the Navy strategy document writes.

Land weapons, port activities and other enemy movements in coastal or island areas are more difficult for deeper draft surface ships to access, often complicating surveillance missions without compromising a location. Surface ships and the drones or aircraft they operate could, in a variety of operational environments, potentially be more “detectable” to enemy radar and sensors when compared with undersea attack submarines. Therefore, it comes as no surprise that Virginia-class submarines are becoming increasingly critical to clandestine “intel” missions beneath the surface in high-risk areas.