Why the U.S. Navy's Virginia Class Submarines Keep Getting Better 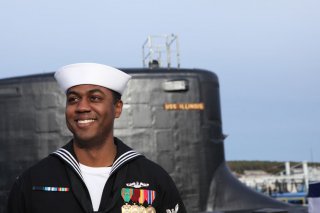 The U.S. Navy is making progress in the early phases of building a new Block V variant of Virginia-class attack submarines which massively increase firepower, incorporate advanced new sonar technologies and leverage the latest advances in automation and AI.

The development deal took a large step forward last December through a $22-Billion contract between the Navy and General Dynamics Electric Boat. Eight of the new Block V deal are being engineered with a new 80-foot weapons section in the boat, enabling the submarine to increase its attack missile capacity from 12 to 40 on-board Tomahawks.

While many of the technical specifics regarding emerging attack submarines are naturally not available for security reasons, new innovations will build upon cutting-edge systems now deployed on the most advanced attack submarine ever to deploy—the USS South Dakota. The South Dakota, which is now operational, began as a prototype, test-bed platform to evolve new technologies.What all of these USS South Dakota innovations amount to is that, Navy officials say, they are informing current engineering regarding Block V as well as early conceptual discussions for a new Block VI submarine to begin in 2024. While many details are not available, generally speaking the USS South Dakota is engineered with additional engine-oriented quieting technology, advanced antennas for reconnaissance and less-detectable external “coating” for the submarine, Navy developers explain.

Looking at the multi-year trajectory of Virginia-class development; each Block has incorporated several impactful new technologies not yet present when the previous boats were built. For example, unlike Blocks I and II, Virginia-class Block III boats significantly increase firepower with the introduction of what’s called Virginia Payload Tubes, adding new missile tubes able to fire 6 Tomahawks each. Block III also includes a new Large Aperture Bow “horseshoe-shaped” sonar, which switches from an “air-backed’ spherical sonar to a “water-backed” array, making it easier to maintain pressure, according to a 2014 report in “NavSource Online.”

The technical elements of undersea command and control, quite naturally, are also being engineered with a mind to an expected increased use of underwater drones. The Navy is now moving quickly with efforts to build an entire new fleet of UUVs able to destroy mines, conduct lower risk forward surveillance, deliver supplies or even fire weapons with a “human-in-the-loop.”

A closer-in or littoral undersea advantage can increase “ashore attack” mission potential along with ISR-empowered anti-submarine and anti-surface warfare operations.