Why Vietnam Took a Page Out of America’s Economic Playbook 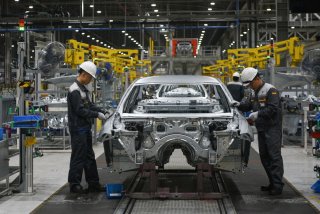 You would be forgiven for thinking—and it would be all too understandable after the war—that the people of Vietnam are anti-American. Quite the contrary: the Vietnamese people admire economic success and hardly experience any social envy.

The consequences of the Vietnam War were devastating for the country. Weapons used by the United States, including the defoliant Agent Orange and napalm bombs, not only struck communist forces but also harmed the civilian population. South Vietnam alone lost 1.5 million people, including 300,000 civilians. U.S. casualties amounted to 58,200 troops killed plus another 300,000 who were wounded. Civilian casualties in North Vietnam were comparable to the South, but Hanoi lost far more soldiers.

In the north, major industrial centers and public infrastructure were destroyed. Manufacturing plants were decimated. Three of the six largest cities, twelve of the twenty-nine provincial capitals, and two-thirds of all villages were destroyed. Power stations, railroad stations, ports, bridges, roads, and the entire railroad network were decimated. In the south, two-thirds of villages were also obliterated, five million hectares of forest were razed, and 20 million farmers lost their homes.

No Anti-Americanism in Vietnam

Given all of this destruction and suffering, it would not be surprising if Vietnam was a hotbed of anti-Americanism. But anti-Americanism in Vietnam is less pronounced than in many other parts of the world. In fact, anti-Americanism is not only stronger in Arab countries and Russia, but it is also quite prevalent in many European countries, such as Germany and France.

In 1998, the U.S. ambassador to Vietnam, Pete Peterson, married a Vietnamese woman. He had flown sixty bombing raids over North Vietnam during the war before he was shot down in 1966. He then spent seven years in North Vietnamese captivity as a prisoner of war. His wedding attracted a lot of attention at the time.

I was in a relationship with a woman for several years whose parents were from Vietnam. I never once heard her or her parents talk badly about Americans. Dinh Tuan Minh, a scholar from a think tank I met in Hanoi a few days ago, said, “We Vietnamese do not look back to the past, but to the future. Unlike with China, we have no territorial disputes with the U.S. Many Vietnamese people also appreciate the fact that working conditions in U.S. companies that invest here are often better than in Asian companies that invest in Vietnam. In addition, people in Vietnam know that the U.S. has become our most important export market.” Indeed, in 2020, Vietnam exported as much to the United States as it did to China and Japan, its second and third largest export markets, combined.

I also spoke with an entrepreneur named Xuan Ngyuen about the same topic while I was in Hanoi: “I was born in 1987. The war had already been over for 12 years. My parents and grandparents did talk about how terrible the war was, but they never had a bad word to say about the U.S. and Americans. On the contrary, they told me, “You must learn to speak English, dress like Americans, eat the same food that Americans eat, and above all, learn to think like an American. Then you will be successful.”

I admire people who manage to look more to the future than to the past. Such people are usually far more successful in life than those who constantly focus on the past. This applies not only to individuals but also to nations.

In 1975, North Vietnam won the war against the United States and its ally in Saigon. This already proud country became even prouder, for they had defeated the greatest military superpower in history. But their pride suffered over the next ten years as the introduction of a socialist planned economy made Vietnam the poorest country in the region. While Asian countries that took the capitalist path, such as South Korea, Hong Kong, and Singapore, achieved incredible growth and massively reduced poverty, most people in Vietnam lived in bitter poverty ten years after the war had come to an end.

The forced collectivization of agriculture was no more successful in Vietnam than it had been in China or Russia. In 1980, Vietnam produced only 14 million tons of rice, despite the fact that the county needed 16 million tons to meet its own population’s basic needs. During the period of the second five-year plan (1976 to 1980), Vietnam was forced to import eight to nine million tons of rice and other foodstuffs.

Production stagnated and state-owned industrial production declined by 10 percent from 1976 to 1980. Until 1988, only small family businesses were allowed as private enterprises in Vietnam; everything else was state-owned.

Vietnamese leaders realized that they were at an impasse. At the VI Party Congress in December 1986, the country’s leaders adopted a comprehensive package of reforms known as “Doi Moi,” or renewal. Similar to China under Deng Xiaoping, private property was allowed and the party focused on developing a market economy.

Today, Vietnam has shaken off its past and reinvented itself. Gross domestic product (GDP) per capita has increased six-fold since the reforms (in current U.S. dollars), from $577 to $3,373. Vietnam is now one of the world’s largest rice exporters behind India and Thailand. But Vietnam exports much more than agricultural products and textiles. Today it is a major producer of electronic goods and exported $111 billion worth of electronic products in 2020.

Under the socialist planned economy, the majority of people in Vietnam lived in extreme poverty. As recently as 1993, 80 percent of the Vietnamese population was still living in poverty. Over the last decade, poverty has declined dramatically. According to the World Bank, “Between 2002 and 2021, GDP per capita increased 3.6 times, reaching almost US$3,700. Poverty rates (US$1.90/day) declined sharply from over 32 percent in 2011 to below 2 percent.”

Poverty in Vietnam was not eliminated by wealth redistribution but by market economics. Redistribution has never been a successful tool in the fight against poverty anywhere in the world. The tax rate for high earners in Vietnam is only 35 percent, and for that, you have to earn about 14 times more than an average earner. In any case, social envy directed at the rich is a foreign concept in Vietnam because wealth is admired here. Of eleven countries where I commissioned Ipsos MORI to conduct a survey on attitudes toward the rich, Japan was the only other country in which opinions were as positive as in Vietnam.

In a paper from the Vietnamese social scientists Nguyen Trong Chuan, Nguyen Minh Luan, and Le Huu Tang, which was published in the book Socioeconomic Renovation in Viet Nam, the authors said the following about rural inequality: “Those households who have good opportunities, better experience, talent for working and trading, and healthy labor, will be richer. Thus the polarization does not represent inequity but equity: Those who work hard and well earn more, while those who are lazy and work inefficiently and ineffectively will earn less.”

The authors also strongly oppose redistribution strategies: “In comparison with the subsidy system, where distribution was egalitarian, the current polarization between the rich and the poor shows the reestablishment of social equity.” Inequality is not worthy of criticism and the pursuit of wealth should be encouraged, they explained: “Polarization has itself become an important motivating force behind the recent considerable economic growth.” It would be a mistake to abandon the pursuit of free-market reforms simply because inequality between rich and poor is increasing, the Vietnamese sociologists concluded. You don’t often hear similar remarks from sociologists in the United States and Europe.