Why Was the U.S. So Slow to Recognize China As Dangerous? 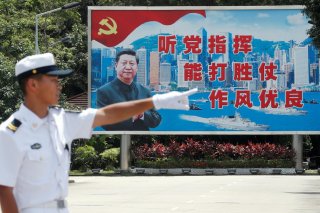 America’s future as well as the world’s because assumptions about China and the U.S. position in the world are in flux.

Every state makes its foreign policy based on assumptions about its society and international politics.  These assumptions are usually anchored in the past.  While there is great value in learning from history, it is also true that conditions change, and what was true of the past is no longer.

During the Cold War, the U.S. foreign policy was largely based on assumptions that the Soviet Union's leaders were determined to spread communism worldwide; they possessed strategic patience and were adaptive in pursuing their goal.  The USSR would never be America’s partner but a long-term rival, and therefore it must be contained.  Moreover, U.S. decision-makers assumed that American society would fully support this approach.

However, after the end of that confrontation, strategists like former National Security Advisor and Secretary of State Henry Kissinger falsely assumed that Communist China could be changed into a benign actor, even a “responsible stakeholder,” or strategic partner of the U.S. were the U.S. to engage with China, believing that China’s rise was a positive thing.

We argue that China is not just a rival but a formidable enemy.  Its goal is not just to weaken America but supplant it and the liberal international order it created with a Communist ideology-based model of global governance. The PRC is more dangerous than the Soviet Union because it is unpredictable and more formidable.  It is an amalgamation of a rapidly rising power and an ideological regime with an aggressive leader in Chairman Xi Jinping.  Xi is both extremely ambitious and paranoid about his regime’s security as well as his own.  These factors make this enemy far less certain than the Soviets.

Additionally, China is far more formidable than the Soviet Union because it has learned key lessons from the USSR’s mistakes regarding competition with the United States.  It is an extremely adaptive adversary.  So adaptive that it has been seen as a partner rather than an enemy for a generation.  Moreover, it was so highly valued as a partner that it was brought into the Western economic ecosystem to be allowed and encouraged to prosper.  China’s rapid growth was made possible by the U.S. government, business, financial markets, and universities, as well as its own efforts.  Close ties between the American elite and Chinese business interest remain strong, even in the wake of the coronavirus.

Fundamentally, there remain sectors in U.S. government, business, and intellectual communities who still see China as a partner and want to return the Sino-American relationship to “normalcy.”  Even in the wake of the coronavirus, close ties between the American elite and Chinese business interest remain strong, and there is an assumption that things will return to normal once Trump leaves office.

This hope is buttressed by China’s massive global propaganda apparatus, other infiltration operations in our society with equal parts ethical relativism, venality, and compliancy, which offers opportunities for China to penetrate our country to undermine it with mechanisms, possibilities, and circumstances the Soviets never possessed.

Based on the nature of Communist China, the historical pattern of its behaviors, its capabilities, and grand strategic objectives, we must assume that Chinese power cannot be gradually mellowed under the current conditions but can only be altered by cutting off its power sources, particularly its economic power, and to delegitimize and force Xi to step-down before the regime completes its accelerated metamorphosis.

A common misperception is that China is protean.  It has no coherent, universal ideology and thus is not interested in exporting its political beliefs, as some scholars argue. In fact, Marxism-Leninism-Maoism is China's basic guiding ideology.  It does indeed export its governing model in international institutions and through its Belt-and-Road program under economic disguise.

The U.S. reacts to peer competitive threats most vigorously during and in the wake of an attack or major crisis that compels accurate threat identification.  Notably, this been absent in the current case.  Historically, it was only after Pearl Harbor and the Czech coup and the first Berlin Crisis that the U.S. threat response was sufficient.  Even with higher levels of threat identification at the outset of the Cold War, the Truman administration's threat response was imperfect and too reactive to Soviet coercive diplomacy.  Yet, appreciably, its "all azimuths" response provided the strategic foundation for the U.S. and its allies to fight and win a long struggle.

The confrontation with China has clear echoes from the past concerning its assumptions and in threat identification, but also far worse than the Cold War in the denial of the threat by so many sectors of U.S. society, economy, and national security community which accounts for the U.S.’s tardy response.  Of course, it is also unique.  U.S. officials and business leaders who minimize the China threat are augmented by active and energetic PRC’s efforts—far exceeding those of Germany, Japan, or the Soviet Union—to minimize its perception as a threat, and thus suppress a focused and necessary response.  These unique aspects pose substantial dangers for the U.S. as they have retarded an effective U.S. response.  Any effective response begins strategic and moral clarity to counter China.

Bradley A. Thayer is Professor of Political Science at the University of Texas San Antonio and is the co-author of How China Sees the World: Han-Centrism and the Balance of Power in International Politics. Lianchao Han is vice president of Citizen Power Initiatives for China. After the Tiananmen Square Massacre in 1989, Dr. Han was one of the founders of the Independent Federation of Chinese Students and Scholars. He worked in the U.S. Senate for 12 years, as legislative counsel and policy director for three Senators. @thayerhan1.

This article by Bradley A. Thayer and Lianchao Han first appeared in Real Clear Defense on April 30, 2020.