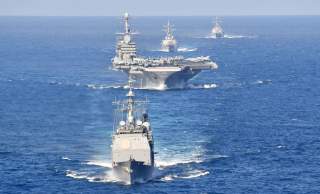 China’s maritime insurgency in the South China Sea has largely escaped public notice in part because it occurs through innumerable seemingly mundane daily interactions. These effectively conceal the extraordinary stakes being contended for when a Chinese ship bullies a humble Southeast Asian fishing boat. Despite its often-modest outward appearance, what is now transpiring in the South China Sea is, in fact, a conflict of world-historical scale, importance, and consequences.

The United States has held the freedom of the sea to be an essential national interest since its founding. The nation depends on seaborne transportation to access the vast majority of the world’s population and markets and has fought no less than six major wars in which freedom of the sea or its subsidiary concept freedom of navigation has been a declared U.S. aim.

Since the U.S. ascent to unchallenged naval mastery in 1945, free seas have been an essential tenet of the U.S.-led rules-based liberal international order. This has been enormously beneficial, driving global prosperity and lifting billions out of poverty. Freedom of the sea also functions as the legal foundation that permits the peacetime deployments of U.S. and allied naval forces to the Eurasian littorals that for 70 years have deterred large-scale aggression and prevented great power war.

China is working to replace this free, open, and rules-based maritime order with an unfree, closed, and hierarchical continental one through the maritime insurgency (described in “The South China Sea Needs a ‘COIN’ Toss”) and other implements such as the Belt and Road Initiative (BRI). If China is allowed to succeed, the Sinocentric world that would follow would be a dark place. If recent behavior is any indication, Chinese leaders desire to see their country reside at the center of Eurasian and global trade and politics, superior to all others, with lesser states meek and subservient to the Middle Kingdom.

With freedom of the sea undone, seaborne trade would no longer travel unencumbered from point to point through international or coastal waters under the principles of innocent passage but would instead be subject to the whims of Beijing and whatever other governments might follow suit to enforce “blue national soil” claims and navigational restrictions on various patches of ocean. BRI infrastructure, meanwhile, would be positioned to increase Chinese influence and allow both trade and information-enabled Chinese security forces to move overland across Eurasia with considerably greater ease than in the bygone days of Silk Road caravans.

The defense of free seas is thus among the first and most vitally important battlefields to emerge in the developing struggle to shape the course and destiny of world order in this century. This is a battle the United States cannot afford to lose. In the absence of effective opposition, China’s maritime insurgency already has made grave inroads; it is time for a focused U.S. and allied strategy of maritime counterinsurgency to turn the tide.

This article by Hunter Stires first appeared in the U.S. Naval Institute's Proceedings Magazine in May 2019.