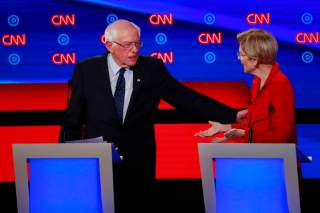 Senator Bernie Sanders has called levels of U.S. wealth inequality “outrageous,” “grotesque” and “immoral.” Democratic presidential candidate Elizabeth Warren is pushing for a wealth tax to curb what she describes as “runaway wealth concentration.” Yet despite their rhetoric, it’s not clear, deep down, whether either really cares about wealth inequality per se or believes that reducing it should be an overriding public policy goal.

To see why, consider this. Every year, Credit Suisse calculates a wealth “Gini coefficient” for major countries, indicating their level of wealth inequality in a single number from 0 to 100. Higher numbers indicate higher inequality. In 2018, the U.S. really did have a comparatively high figure at 85, as Warren and Sanders lament. But how this number compares to other countries is instructive.

Many poorer economies, such as Ethiopia (61), Myanmar (58), and Pakistan (65), have lower wealth inequality than America. Meanwhile, a diverse range of countries have similarly high wealth inequality, including Russia (88) and Kazakhstan (95), through to Sweden (87) and Denmark (84). Unsurprisingly, neither Warren nor Sanders argue for the U.S. to adopt Ethiopia or Pakistan’s economic model in pursuit of more equality. But Bernie Sanders has said in the past that Denmark and Sweden are exemplars par excellence of his vision of “democratic socialism,” seemingly not caring that their wealth distributions are “outrageous,” “grotesque,” or “immoral,” according to his own self-defined standards.

The truth, acknowledged by the candidates’ own talking points and omissions, is that wealth inequality statistics in isolation tell us nothing particularly interesting about an economy’s health. Without analyzing in detail the underlying causes of a wealth distribution, statistics like the Gini coefficient, or the top 10 or 1 percent wealth shares, give us no indication of whether “good” or “bad” trends have driven the distribution of net assets across society. Sanders and Warren might use such summary wealth statistics as if they are proxies for “fairness” or how “rigged” the economy is. But few sane people would argue Sweden is less fair than Myanmar, or that the U.S. economy is more rigged than Argentina (79) or Qatar (62). These figures, as with top wealth shares, are a poor guide to policy.

All this shows that when it comes down to it, the candidates don’t prioritize wealth egalitarianism as a social goal when it conflicts with their other aims. This is somewhat of a relief. Japan immediately after World War II was a very equal place, as was China before its relative economic liberalization from around 1980. But the cost of achieving that wealth egalitarianism in both cases was intolerably high: mass destruction through war and grinding communist poverty. As former treasury secretary and Democrat Larry Summers recently said with beautiful understatement, “I do not think a focus on wealth inequality as a basis for being concerned about a more just society is terribly well-designed.”

In our new paper today, “Exploring Wealth Inequality,” Chris Edwards and I examine some potential causes of wealth inequality in the U.S. In a global free market, the distribution of wealth can widen as entrepreneurs make groundbreaking innovations to become hugely rich through selling their products or services to better-off consumers all around the world (a positive sum cause). On the other hand, cronyism, rent-seeking, and certain bad government regulations can be a destructive cause of wealth inequality – enriching some at the expense of others and reducing overall wealth. There’s lots of evidence too that social insurance programs come with a big trade-off: though they may reduce after tax-and-spend income inequality, they widen wealth inequality by deterring the means and incentive to save among the middle-classes and the ability for them to inherit their wealth.

Sanders and Warren talk as if it’s pure cronyism or greed that has led to high measures of U.S. wealth inequality. In crude terms, they imply that the U.S. economy is more like Russia than Denmark. And, of course, there is some rent-seeking, which policy change could help stamp out. But evidence that this is the overwhelming cause is weak; dynamic entrepreneurial activity and redistributive programs are clearly significant drivers of wider wealth inequality too. Yet neither candidate argues for shrinking the welfare state to reduce measured private wealth gaps. In fact, both want to massively expand it. That revealed preference heavily suggests wealth inequality isn’t a primary concern for either, but rather a secondary one.

Ryan Bourne occupies the R. Evan Scharf Chair for the Public Understanding of Economics at Cato.​