Why Weren't These Gutsy Women Included in Clinton's Book? 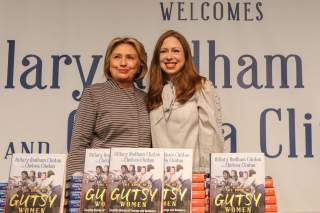 Hillary Clinton and Chelsea Clinton have a new book out, The Book of Gutsy Women. The publisher says they "share the stories of the gutsy women who have inspired them—women with the courage to stand up to the status quo, ask hard questions, and get the job done." They certainly tell the stories of some inspiring women -- Harriet Tubman, Helen Keller, Anne Frank, Maria Montessori, Marie Curie, and more. But I couldn't help noticing some women who didn't make it into the book's 432 pages.

I suppose these women were just a bit too gutsy for the authors. Thatcher too capitalist, Rand too individualist, Rankin too antiwar, and so on. These women epitomize the line from historian Laurel Thatcher Ulrich: Well-behaved women seldom make history. And they don't quite fit the parameters of Hillary and Chelsea Clinton's East Coast Establishment woke-but-not-too-woke liberalism.