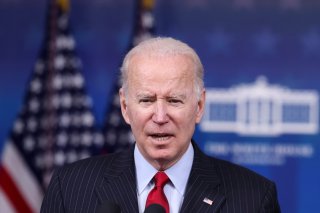 Recent events have once again proven the power of energy. After Russia initiated a “special military operation” into Ukraine—which saw a Russian infantry and armored invasion force cross the border—under the guise of a “peace-building” operation, the United States and its allies have imposed a flurry of new sanctions. These unprecedented sanctions are targeting Russian banks and wealthy individuals and even restricting Russia from SWIFT, which is the backbone of the international banking and financial system. However, despite Russia’s aggression, Western sanctions have steered clear from targeting its oil and gas sector—where Russia is most economically vulnerable. Why is that the case?

The timing of Putin’s attack is impeccable in that it is strategically exploiting a global economic and energy crisis. Inflation is rampant around the world and has reached the highest level in decades: In the United States, inflation has hit a forty-year high, registering an uptick of 7 percent over 2021. In Spain, inflation has hit its highest rate since 1989 (thirty-two years) at 6.7 percent. The story is the same for Germany, where inflation reached a thirty-year high at 3.1 percent and is expected to remain high, creating challenges for the European Central Bank. The United Kingdom, too, is seeing a 5.1 percent inflation rate, the highest in thirty years, while the Eurozone is experiencing a yearly increase of 5.1 percent, a level that hasn’t been seen since 1997. Turkey is also seeing an inflation rate of nearly 50 percent (48.7 percent to be precise), its highest in twenty years, while inflation in Latin America is the highest in the world. Along with inflation, supply chain disruptions have affected every country and global businesses are facing pressure to increase wages. Consequently, 2022 started with most countries being focused on internal problems.

Furthermore, Europe and Asia alike are being afflicted by an ongoing energy crisis. After the global economy began to open up after the worst period of the Covid-19 pandemic, there was a surge in demand for electricity and energy more broadly. Simultaneously, Europe’s domestic gas production and gas stores have been declining for years and Russian exports cannot meet the demand. Thus, exorbitant energy prices have been harming European consumers. For example, energy prices are expected to rise by 54 percent in the United Kingdom. Despite that this crisis has been widely blamed on Russia, analysis suggests that it is actually due to the EU’s internal policies and companies fulfilling their contractual obligations.

This context explains why the West has opted to not sanction Russia’s oil and gas sector. Russia provides 40 percent of Europe’s energy needs, and sanctioning Russia’s oil and gas sector will exacerbate an already tense energy environment at home. Rising energy costs negatively impact European’s lives by increasing the cost of food, transportation, and heating—the prices of which are already at highs not seen n a decade. These developments not only eat away at governments’ political capital but can also result in social discontent (rising food prices show a direct correlation with rising socio-economic unrest).

Russia is aware of these dynamics and understands that it has leverage over the West. Yet Vladimir Putin also recognizes that there is a correlation between Moscow’s aggressive behavior and higher oil prices, which only serve to increase his financial leverage. For instance, the price of oil was at a historically-elevated level during Russia’s 2008 attack on Georgia ($125) and 2014 annexation of Crimea oil price ($102). The same pattern holds in 2022, when oil prices crossed $100 for the first time in seven years. Furthermore, Bloomberg reports that Russia’s budget will receive an additional $65 billion in revenues at current oil prices. Last year, in 2021, the country’s oil revenue jumped 41 percent. This means that Russia will not have any liquidity issues. This is evident by the fact that Russia has $630 billion in reserves—its highest amount ever—and, per a fiscal rule, adds any revenue above $43 per barrel into its national sovereign wealth fund. The trade in commodities related to energy accounts for one-fifth of Russia’s budget.

It is, therefore, practically difficult to sanction such a key sector as it will create ripples across the socio-politico domain. Gasoline prices in the United States are at their highest since the summer of 2014, at $3.64 and rising oil prices stand to make it worse. This means that the West must walk a fine line between punishing Russian aggression and balancing their own economic and political needs. Such are the realities of this great power game which has become even more complex as global economic integration has reached extraordinary depths.