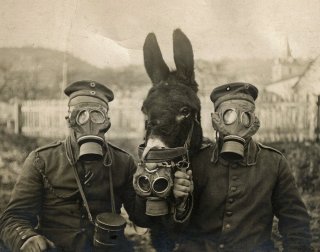 A new report released earlier this month by the Organisation for the Prohibition of Chemical Weapons (OPCW) accused the Syrian Air Force of twice using sarin gas to attack the town of Ltamehan in March 2017 during its ongoing civil war. The use of chemical and biological weapons was banned after the First World War and reinforced in subsequent bans in 1971 and again in 1993.

The use of chemical weapons actually goes back to antiquity when the Athenian military tainted the water supply of the besieged city of Kirrha with poisonous hellebore plants, and later when Peloponnesian forces used sulfur fumes against the town of Platea.

In the Middle Ages, the Mongol Army took a more gruesome approach and used trebuchets to hurl their own dead, who had been infected by the plague in the Siege of Caffa. A few centuries later the first effort to ban chemical weapons came in 1675 when France and various German states signed the Strasbourg Agreement, which banned the use of poisoned bullets. Most Western nations agreed to similar bans that were suggested in a series of international treaties signed from 1874 to 1907.

Yet such efforts did little to deter military thinkers from considering ways in which chemical weapons, including gas, could be employed. During the American Civil War, schoolteacher John Doughty proposed firing chlorine-gas projectiles at Confederate troops, while Confederate soldier Isham Walker suggested dropping canisters of poison gas from balloons. Neither side actually employed such methods to kill their enemy, but just sixty years later poison gas did make its horrific debut on the battlefields of the Western Front during the First World War.

Germany is usually cast as the villain for introducing the use of gas, but in fact, in only the first few weeks of the war in August 1914 during the Battle of the Frontiers French, soldiers deployed tear-gas grenades, which had been developed in 1912 for police use.

The gas wasn't very effective, nor was it as insidious as what came next. In October 1914 Germans fired 3,000 shells containing dianisidine chlorosulfate, a lung irritant, at the British army at Neuve-Chapelle – but the chemicals were actually incinerated by the explosive charge and the British were left unaware that gas was even used. In January 1915 another effort, that time using irritant xylyl bromide, was fired at Russian troops in Bolinow, but cold weather kept the liquid from vaporizing.

While ineffective, the use by the Germans marked a crucial turning point at least in the fact that the combatants disregarded the existing bans.

On April 22, 1915, during the Second Battle of Ypres the world soon understood how horrible poison gas could be when nearly 170 metric tons of chlorine gas was used along a four-mile stretch of the front. More than 1,100 French and Algerian colonial troops were killed, which allowed the lines to be breached. However, the Germans were so shocked by the impact that they failed to take full advantage of the attack.

By the end of the war gases used included chlorine, mustard gas, bromine and phosgene, and the German Army was the most prolific user of gas warfare. While gas was effective in clearing enemy forward positions it failed to become a decisive weapon in part because anti-gas measures also became increasingly sophisticated. The early anti-gas measures were just cotton face pads soaked in a bicarbonate of soda, by the time the war ended anti-gas measures involved filtered respirators that used charcoal or chemicals to neutralize the gas.

While the physical effects were often agonizing, just three percent of gas casualties proved immediately fatal, but hundreds of thousands of former soldiers experienced lasting effects including psychological trauma for years after the war ended.

The Geneva Protocol, adopted by the League of Nations in 1925, bans the use of chemical and biological agents in war. However, it did not prohibit the development, production or even stockpiling of such weapons. As a result, many nations have agreed to such bans while still stockpiling as a precautionary move to be able to respond in kind if attacked with chemical weapons.