Why the World Should Never Accept a Nuclear North Korea 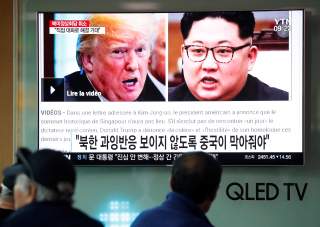 As informative as this case study evidence is, a more rigorous statistical examination of accidental nuclear war risk would be extremely valuable. However, as one might expect, there is only very limited publicly available data on nuclear early warning system effectiveness and performance. Using the data there is, Barrett, Baum, and Hostetler put the chance of an accidental U.S./Soviet nuclear war at 2% per year (mean estimate). If the chance of a U.S.-North Korean nuclear war is also 2% per year (and it could be higher), then there is about a 45% chance of a U.S.-North Korean nuclear exchange at some point over the next 30 years (Kim is in his mid-30s).

Deterrence is in part about putting into place a second strike capability to eliminate your rational opponent's incentive to launch a first strike. But deterrence is also a submarine captain, mentally and physically exhausted from attempting to dodge detection by the enemy navy, breathing bad air, thinking that his sub is about to be destroyed, and deciding whether or not to take some of the enemy with him before that happens. Deterrence is an early warning duty officer seeing a "Launch" alarm on his screen, feeling like he is sitting on a hot frying pan, and deciding whether to disobey his orders or to report what his gut is telling him is a false alarm up the chain of command (in North Korea disobeying orders in such circumstances could lead to torture and death). Deterrence is a leader being woken up at 3 am with the news that early warning systems have detected with high reliability the launch of a decapitation strike, and having a few minutes to decide how to respond. The cold serene logic of game theory offers no guarantees against a catastrophic deterrence failure here.

In practice, then, choosing to deal with the North Korean nuclear threat by deterring them rather than by CVID is to take a leap of faith–a bet that somehow, in some mysterious way, things will always work out for the best. The crisis won't spin out of control. The early warning systems will always work perfectly, or, if they don't, a Stanislav Petrov will be there to save the day. Studies of nuclear crisis episodes, the case study evidence on nuclear war near misses, and the statistical evidence we have on accidental nuclear war risk all suggest otherwise. The risk of a catastrophic deterrence failure is inevitably real and substantial. Or, in other words, there is no such thing as stable nuclear deterrence.

The awful arithmetic our situation is that a preventive war now–as horrible as that would undoubtedly be–is a much more prudent option than a reckless gamble on never losing a round of deterrence roulette (where losing means a nuclear exchange with a vastly more powerful North Korea in the future). Every day that the U.S. delays acting makes the preventive war that it will need to wage more costly. As John von Neumann put it, "If you say why not bomb them tomorrow, I say why not today? If you say today at 5 o'clock, I say why not 1 o'clock?".

President Trump needs to present North Korea with a final opportunity to comply with the Singapore summit agreement by taking concrete steps to begin the CVID process. If North Korea declines, he must summon up his inner Lincoln, find his General Grant, and get it done.

Kevin R. James is an economist in the Systemic Risk Centre at the London School of Economics. This first appeared in RealClearDefense here.