Why You Should Fear China's Nuclear Weapons 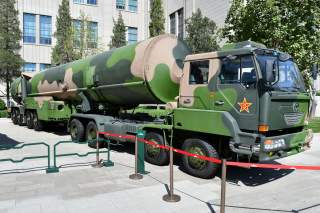 In 2006, China said that it was “progressively improving its force structure” of both nuclear and conventional missiles. This is exactly what has happened. This expansion of Chinese nuclear capability has occurred despite the fact that the U.S. drastically reduced its nuclear capabilities after 2001. China’s nuclear buildup must be viewed in the context of the largest and longest sustained military buildup in the post-Cold War world. What is very significant is that China began its military buildup after threats to China largely evaporated at the end of the Cold War.

China is extremely secretive about its nuclear forces. In 1982, Mao’s successor, Deng Xiaoping, said that China should “…hide our capabilities and bide our time.” This may be a good description of Chinese policy when it comes to revealing its nuclear capability. Its objective would appear to be to hide its capabilities to achieve strategic surprise and minimize the risk of a U.S. response to its nuclear buildup. However, it is noteworthy that the Chinese state media and, to some extent, the Chinese government have been more open in revealing China’s nuclear capability for its non-strategic systems.

Despite Chinese secrecy, what is known is troubling. Chinese nuclear expansion must be viewed against the backdrop of Chinese territorial expansion in the South and East China Seas and the overall growth of Chinese military capability. The Chinese government promotes strong nationalism and communist ideology is still prevalent in the People’s Liberation Army (PLA).

According to the 2018 Nuclear Posture Review, “China, too, is modernizing and expanding its already considerable nuclear forces. Like Russia, China is pursuing entirely new nuclear capabilities tailored to achieve particular national security objectives while also modernizing its conventional military, challenging traditional U.S. military superiority in the Western Pacific.” Furthermore, the report says China, like Russia, has added: “…new types of nuclear capabilities to their arsenals, increased the salience of nuclear forces in their strategies and plans, and engaged in increasingly aggressive behavior, including in outer space and cyberspace.”

A 2017 National Institute for Public Policy (NIPP) report points out, “The Obama Administration estimated that China has several hundred nuclear weapons, but other estimates place the number much higher.”[6] The high estimates go up to several thousand. Irrespective of what the current number is, there are indications of a major force expansion. The NIPP report further noted, “The extensive length of China’s ‘Underground Great Wall’ (which the Chinese say is 5,000 km of deep tunnels), suggests that a larger force of nuclear-armed ICBMs may be planned.” In addition to protecting mobile ICBMs, these tunnels provide a place to hide them. The implication of this extensive network of deep tunnels for U.S. nuclear weapons requirements has been largely ignored. While the Obama Administration stated we needed “significant” counterforce capability, its subsequent programmatic decisions went in the opposite direction. Some of this has been changed by the 2018 Nuclear Posture Review, but some of it has not. Thus, the U.S.’ ability to target these tunnels is limited because we have inadequate capability to destroy hard and deeply buried targets and it is actually declining.

According to the 2019 Defense Intelligence Agency report on “China Military Power”, “China is developing a new generation of mobile missiles, with warheads consisting of multi­ple independently targetable reentry vehicles (MIRVs) and penetration aids…” Over the last decade, China has developed and deployed new nuclear DF-31 and the DF-31A mobile ICBMs, a MIRVed version of their DF-5 silo-based ICBM, the type 094 ballistic missile submarines carrying JL-2 SLBMs and H-6J cruise missile-carrying bombers. The reported range of the H-6J, 8,000-km, would make it a heavy bomber under the New START Treaty range definition. Additionally, the Chinese J-20 air-launched cruise missile is nuclear capable. Indeed, in December 2013, a story in the Chinese state media talked about China’s H-6K bombers launching nuclear-armed cruise missiles against U.S. bases in South Korea and Japan.

China has displayed its new reportedly MIRVed, DF-31AC a road-mobile solid-fuel ICBM at a military parade. Chinese state media also recently indicated that the large mobile heavily MIRVed DF-41 mobile ICBM is operational. The state-run Global Times wrote that it would give China “respect.” The DF-41 is generally reported to carry 10 nuclear warheads. Moreover, China has said it is developing a new nuclear-capable bomber, reportedly a stealth design.

The 2017 Pentagon report on Chinese military power says that in the early 2020s China will likely begin the construction of new type 096 submarines which reportedly will carry the new JL-3 SLBM.  There are reports that the JL-3 will be MIRVed. A 2017 unclassified DIA report indicates China is now deploying “two, new air-launched ballistic missiles, one of which may include a nuclear payload.”

A 2017 unclassified National Air and Space Intelligence Center (NASIC)  report indicated there were 33 types of Chinese battlefield rockets, theater-range ballistic and cruise missiles. Various unclassified U.S. government reports have said the DF-26 IRBM, the DF-21 medium-range missile, including the carrier killer DF-21D, the new cruise missiles, China’s hypersonic glide vehicles, and an air-launched ballistic missile are nuclear capable. According to the 2018 Nuclear Posture Review report, China’s new DF-26 is “a nuclear-capable precision guided… intermediate-range ballistic missile capable of attacking land and naval targets.” The U.S. does not have this capability.

China has been testing hypersonic missiles for years. In 2018, Chinese state media claimed its hypersonic DF-17 boost-glide vehicle, with a range of 1,000-1,500 miles, can sink carriers. Initial operating capability for the DF-17 is reportedly expected in 2020. In December 2018, China reportedly tested the Starry Sky 2 Mach 6 powered hypersonic missile (it is also characterized as an aircraft, probably, inaccurately) which is reported to be nuclear capable.

To modernize its nuclear forces, China continued high-yield nuclear testing through 1996. The purpose of Chinese nuclear tests in the 1990s was to “develop small, light warheads for the PRC’s new nuclear forces.” According to declassified intelligence reports, China’s nuclear  tests in the 1990s were mainly involved with the development of new strategic and tactical nuclear weapons of advanced design. Significantly, Chinese officials have said China has developed new types of nuclear weapons after the end of the Cold War. Xue Bencheng, reportedly one of the most important scientists involved in the development of China’s neutron bomb, stated that the July 1996 Chinese nuclear test was “a great spanning leap” because it solved the problem of nuclear weapons miniaturization.

Writing in 2002, Russian military journalists Vyacheslav Baskakov and Aleksandr Gorshkov maintained that China “…will succeed in making the shift from its current megaton-class nuclear ordinance to a level of hundreds and tens of kilotons, thereby increasing the effectiveness of available forces and weapons, flexibility of use in various circumstances and combat situations on both a strategic and tactical level.”

What this means, as the Cox Committee pointed out, is that the stolen U.S. information and computer codes make it much easier for China to replicate the most advanced U.S. Cold War designs, including types that we unwisely eliminated at the end of the Cold War. This enhances the threat potential of reported covert Chinese nuclear testing.

China is expanding its nuclear capability which is what one would expect from a country that is preparing for a major war in Asia on the assumption it will have to fight the U.S. We face a very serious threat from China and its growing nuclear weapons capability is a key component. We may face a nuclear threat from China which is significantly greater than what most U.S. analysts will admit. If China plans to fight the U.S. it would be stupid to do so with an inferior nuclear force when it is now relatively easy for the Chinese to close the gap in nuclear weapons numbers and actually move ahead in the next ten years. China’s growing nuclear capability makes the confrontations that it is deliberately generating very dangerous.