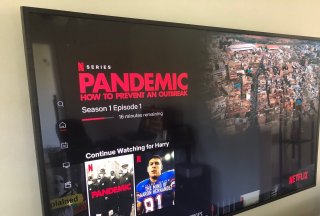 With large numbers of people under shelter-in-place orders due to coronavirus, many of them have passed the time by spending hours on Netflix. And that would be the case even if everyone hadn't gotten enamored with a certain seven-part documentary series involving an eccentric wild animal zookeeper.

So far, Netflix's network has held up quite well from the strain, as the service has traditionally been fairly reliable. There was a brief outage on March 25, lasting about an hour, that affected some but not all customers in the U.S. and Europe, but overall Netflix has held up during the coronavirus period. The company was one of many tech giants that agreed to throttle speeds in the European Union, but Netflix has not made a similar move in the U.S., likely because the government has not asked them to do so.

But should you happen to experience buffering or slow speeds on your Netflix account, there are a series of steps that can be taken to check as to why.

According to Netflix's Help page, those watching Netflix on a smart TV, streaming media player or set top box and experience buffering are advised to take a series of steps, such as ensure your network supports streaming, checking your connection speed, restarting your device, trying a different internet connection, and improving your Wi-Fi signal. Those using TVs are advised to connect their TV directly to their modem.

The page also lists instructions for how to deal with buffering when watching Netflix through other devices, such as Blu-ray players, computers, and mobile phones and tablets.

Is addition to all of those steps, Netflix offers an "Is Netflix Down?" page, where users can check in on whether any type of outage is in progress. If one is not, it simply says "Netflix is up."

However, should you need to avail yourself of Netflix's customer service, good luck: A notation at the top of Netflix's "Help" website states that "thousands of our customer support agents are now having to work from home, making it harder to support your calls," leading to longer-than-usual wait times.

Netflix also, at least at one point, offered a "secret menu" to adjust slow buffering speeds.