Wiesel: Germany's Killer Mini-Tanks That Has Been Forgotten 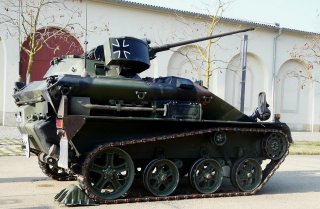 While German tank design is perhaps best known for their World War II armor supremacy, or success in exporting Leopards post-Cold War, the smallest in the Bundeswehr’s inventories is worth a look.

The first Wiesel (weasel in English) was designed in the late 1970s by the German manufacturing firm Rheinmetall to provide West German paratroopers with additional firepower and some armored mobility upon landing. About 350 were built.

The Wiesel does just that — except it was unable to be airdropped despite its modest 2.75 tons, putting it into the tankette category of armored vehicles. Still, it can be slung underneath a CH-53 transport helicopter, or internally transported.

The Wiesel 1s was tiny, a mere 6 feet from the ground to top. They were powered by a modest 86 horsepower diesel engine, but due to the very low weight, the Wiesel is not hindered by the low horsepower, nor by its relatively narrow treads. It is rather mobile, capable of about 40 miles per hour on roads.

The first batch of Wiesels was intended to be used for communications and reconnaissance. They were initially equipped with either TOW antitank missiles or a 20-millimeter autocannon.

While they packed a decent amount of firepower for such a small platform, they were perhaps hindered by their armor, which in contrast to Main Battle Tanks of any country, was relatively thin steel, capable of defeating NATO standard 5.56 and 7.62 rounds, as well as indirect artillery shell splinters.

The Wiesel 2 was an upgrade in every respect, though only a modest 180 or so were manufactured. The engine was upgraded to a 146 horsepower turbodiesel.

The size was expanded in width by several inches, the height by over a foot, and the chassis was lengthened by adding a fifth road wheel. The internal volume was approximately doubled.

Like it’s predecessor, the Wiesel 2 is equipped with either a 20-millimeter autocannon with 400 rounds, with a TOW missile launcher with several missiles and an MG3 machine gun, or with an internally carried heavy mortar system.

There are also ambulance variants, mobile command, and air defense models. Additionally, the Wiesel 2 was outfitted with an NCB (nuclear, chemical, and biological) protection system.

The United States also showed interest in one point, acquiring a number of Wiesel 2s for testing both in the lightly armored reconnaissance role, as well as a remote-controlled platform, though the limited trials did not advance.

The Past Becomes Present

Though tankettes have become almost ineffective on today’s battlefields, Germany’s Bundeswehr still fields the both the Wiesel 1 and Wiesel 2, though their long-term effectiveness is questionable.

For now, at lease, tankettes scoot around in the German Bundeswehr.