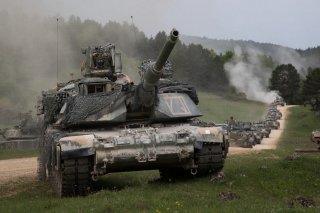 Beneath the surface of its well-known and highly visible large-scale combat platforms such as the Abrams tank and Stryker, General Dynamics Land Systems (GDLS) has more quietly pursued an intense research and development effort to uncover critical new innovations for land war. Artificial intelligence-enabled sensing, coupled with computer processing, can help dramatically improve the life span of many vehicles.

“On the sustainment and logistics side, we call it autonomous vehicle sustainment. You can run algorithms on the vehicle that monitor the key systems, and the engine and the electronic components and compare it to residual life models that we have developed based on decades of data. We can then predict when a system is going to be failing or begin to reduce its capability and provide that alert to the crew and provide that information to the maintenance officers and to the commander so they can make judgments about how to react to the future readiness status of their formation,” Tim Reese, director of U.S. business development at GDLS, told the National Interest in an interview.

GDLS weapons developers point to target recognition systems with artificial intelligence (AI) technology as another key innovation reshaping ground combat. An AI-capable system can collect and organize incoming sensor data, bounce it off of an existing database to solve problems, find patterns and identify targets. This is something GDLS is building into its Abrams and Stryker vehicles, among others.

“The AI bot on the vehicle can alert the crew to something that is not natural in the terrain, and even provide the crew an estimate of how confident it is in what it is seeing. You can say, for example, ‘that's a Russian T 72’ with 80 percent confidence, or ‘that is a civilian carrying some logs on his shoulder, out in the forest, not a soldier with a corner anti-tank guided missile on it,’” Reese said.

In a previous discussion about the advent of aided target recognition with the National Interest, former Army Futures Command Commanding General Gen. John Murray explained that tank gunners used to be shown flash cards with enemy targets. The soldiers who quickly and correctly identified the best targets through rapid visual identification were often chosen to be “gunners” in tanks. Now, however, Murray explained, AI-enabled automatic aided target recognition can draw upon advanced algorithms to make those instant distinctions and identify threat details with high confidence in milliseconds. While there is a critical place for the continued use of those decision-making faculties unique to human observation and cognition, this kind of AI-enabled targeting and processing speed can ease the burden on human decision-makers and give them a much wider and more integrated threat picture.

The entire approach, GDLS weapons developers said, is to fully align with and support the Army.

“Hopefully, the Army will be stimulated enough by something, we see that they'll move it forward in the next stage of their modernization strategy, whether that's a whole brand new program, in some cases, or whether it's an incremental increase in capability to an existing fleet,” Keith Barclay, director of U.S. growth and strategy at GDLS, told the National Interest.