Will Angela Merkel's Legacy Be Defined By Nord Stream 2? 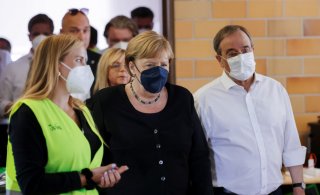 Germany’s Chancellor Angela Merkel will step down in September after a remarkable career on behalf of her nation. But she leaves behind a controversial pipeline partnership with Moscow that will increase Germany’s energy dependency on an increasingly aggressive Russia, and has frayed Berlin’s relationship with the United States, the European Union, as well as Germany’s neighbors.

Her support for the $11-billion Nord Stream 2 pipeline megaproject has driven a wedge in Europe, and the Atlantic, as opponents fear that the pipeline is a weapon that will allow Russia to undermine Europe’s security.

Objections have dogged the project for years, but Russian president Vladimir Putin and Merkel persisted and construction is nearly completed. But it must be commissioned once it reaches land, and the Green Party and environmentalists have initiated litigation and vow to prevent it from ever operating.

Now that she is leaving, the fate of the scheme will be left up to Germans voters who go to the polls this September. They have a clear choice between a fierce opponent of the Russian pipeline—Green Party candidate Annalena Baerbock—and Christian Democratic Union candidate Armin Lashet who supports the pipeline.

Former Chancellor Gerhard Schroder and his party, the Social Democratic Party of Germany, have supported it, along with Germany’s industrialists who will gain huge price discounts and control over European distribution. Schroder is the driving force behind Nord Stream 2 and is its Chair as well as Chair of Rosneft, Russia’s oil giant and the second largest state-controlled company after Gazprom, sponsor of Nord Stream 2. The German Liberal Party opposes the pipeline.

Merkel’s government has stood alone in pushing for the pipeline. The European Parliament opposed the project for security reasons and because it threatens Ukraine, which left the Soviet Union in 1992 and hopes to join the European Union. The United States Congress and former President Donald Trump also opposed the project and approved severe sanctions last December designed to halt construction.

But in May, President Joe Biden waived the sanctions, and he and Chancellor Merkel have promised to devise ways to prevent Russia from coercing Ukraine or others once the line is completed and operational. The fact that such strategies are necessary illustrates the dangers inherent in the infrastructure scheme. The only way to prevent coercion is to prevent the line from being completed.

Last week, Merkel held her final bilateral in Washington with Biden and the two agreed to disagree about the pipeline. But the U.S. Senate continues to block all diplomatic appointments by Biden in protest against the pipeline’s completion.

Merkel has stated that Germany will guarantee Ukraine’s status as an oil transit country even after the completion of Nord Stream 2. But this is a promise upon which Germany cannot deliver, say opponents.

Russia has already begun to flex its muscles before the line has been hooked up. Since Biden backed off sanctions, Russia began cutting shipments of gas through Ukraine to European countries, driving storage supplies down dramatically and increasing prices. The maneuver is clearly designed to put pressure on Germany’s next government to rapidly approve commissioning of the pipeline.

It’s unfortunate that the pipeline in partnership with the Kremlin will become Merkel’s most enduring legacy. Hopefully, Nord Stream 2’s completion will not prove to be a fatal mistake for Ukraine or the European Project she has supported. Only time will tell.

Diane Francis is a Nonresident Senior Fellow at the Atlantic Council and an Editor-at-Large for the National Post.