Will the Army’s Abrams Tanks Get Their Own Hunter-Killer Drones? 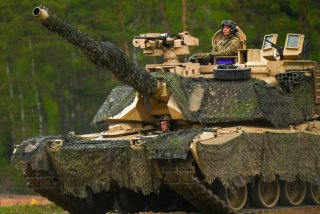 An interesting Popular Mechanics article on the KF51 says the new “Panther” tank can launch four quadcopter drones, opening up possibilities for manned-unmanned teaming and advanced targeting. Neither General Dynamics Land Systems (GDLS) nor the Army confirms that the cutting-edge Abrams tanks can launch drones, however, it may be possible given the state of the Army technology. The Army’s Stryker and General Dynamics’ prototypes of its new Optionally Manned Fighting Vehicle are configured to launch drones. It would make sense for an Abrams tank to have aerial intelligence, surveillance, and reconnaissance capabilities built into its infrastructure.

Through networking advances, Abrams crews are likely already capable of viewing live video feeds from nearby drones without data having to first route through a command center. Much of the Pentagon’s data processing work can now be done with artificial intelligence (AI) systems at the point of collection, allowing key moments of relevance—such as emerging enemy target data—to be identified and organized for human decisionmakers in a matter of seconds.

The Army and GDLS have been experimenting with a Stryker-launched drone called the Shrike 2 since as far back as 2018. This concept is a vertical take-off drone able to launch from the turret to find, track, and even attack enemy targets with explosives. Then, using a standard video data link, the drone can work in tandem with an attack missile to destroy the targets it finds. The technology is intended to expedite the sensor-to-shooter loop and function as its own “hunter-killer” system. A former senior GDLS weapons developer talked to the National Interest years ago when Shrike 2 was being integrated, saying, “A missile warhead can be launched before you show up in town. It has a sensor and killer all in one platform. Let’s reach out and kill the enemy before we even show up.”

This example is extremely relevant for current efforts to modernize the Army’s fleet of tanks. It seems unlikely that advanced Abrams tanks would be unable to do something similar, as it is certainly something within the technological realm of possibility.