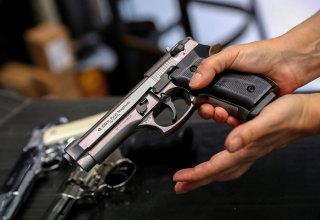 The United Nations was created to help maintain peace and stability, but in recent years critics of the organization have argued that it often engages in considerable overreach in its efforts. This is especially true in how certain aspects of its efforts to reduce conflict around the globe could violate the rights of American citizens. This is most evident in the Second Amendment and the UN’s attempts to regulate the sale of firearms.

At the center of the issue is the Arms Trade Treaty (ATT), a multilateral treaty that regulates the international trade in conventional weapons. It has been in effect since 2014 and while it was meant to regulate the sales and transfers of tanks, military aircraft and other military hardware, its critics—including the National Rifle Association (NRA) and National Shooting Sports Foundation—have warned that it could impact U.S. gun owners by limiting the availability of commercially-made firearms and parts.

To date, 110 nations have ratified the treaty, while 32 have signed but not ratified it. Among those latter nations is the United States. In fact, two years ago then President Donald Trump withdrew from the treaty and in a statement at the time said, “We will never surrender America's sovereignty to an unelected, unaccountable, global bureaucracy.”

“I have come from Washington, D.C., this week to take the floor on the agenda item Treaty Universalization to underscore the continuing commitment of the United States to responsible international trade in conventional arms,” William Malzahn, deputy director for Conventional Arms Threat Reduction in the Department of State, said at the 7th Conference of States Parties to the Arms Trade Treaty.

“The United States has long supported strong and effective national controls on the international transfer of conventional arms, and the Arms Trade Treaty is an important tool [for] promoting those controls internationally,” Malzahn added. “The new CAT Policy will better frame the intent and priorities of the Biden/Harris administration and formalize the approach of the administration as adopted on arms transfer decisions that have been in effect since President Biden entered the White House in January.”

The Arms Trade Treaty could go further than reducing conflict, warned critics. The NRA has said that it could require all firearms purchased by Americans to be tracked, and guns registered to ensure compliance with the treaty.

“ATT has consequences for American gun owners,” the NRA said in a statement via its official social media account on Twitter. “If the UN gets its way, its deliberately undefined & loose terminology will be used to mandate the provision of personal info related to any American that purchases a firearm manufactured overseas to the origin country’s govt.”

“This is the first step towards creating a global firearms registry,” the group added.

Since taking office in January, President Joe Biden has pushed for gun control, including calling for enhanced background checks, banning the sale of parts that can allow individuals to build their own firearms and even calling for a ban on many popular semi-automatic rifles. The president also has sought to overturn a law that would allow firearms companies to be sued when their products are used in illegal activities.