Will Florida Midterms Be Impacted by Battle Over Guns? 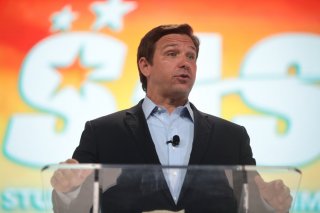 Two issues bring more emotion and divide to this country like no others. Abortion and the Second Amendment remain among the nation's greatest "wedge issues"—and both continue to fuel division. President Joe Biden's calls for gun control, and his now withdrawn nomination of David Chipman to head the Bureau of Alcohol, Tobacco, and Firearms (ATF), have only intensified the debate. However, the legal case that the Florida Supreme Court will soon hear could truly impact next year's midterm election in the Sunshine State.

At the center of the issue is a challenge to a 2011 gun law that was recently expanded by Republican Gov. Ron DeSantis.

"Politics and gun policy have long been intertwined in Florida, a state where the National Rifle Association (NRA) has held huge political sway over the GOP majorities that pass pro-gun bills over Democrats, who have relied on courts to stop what they could not," Politico.com reported this week.

In 1987, the Florida Preemption Law was passed, and it essentially prevented local governments from passing more restrictive gun control laws than those passed by the state Legislature.

"This law ensures that lawful gun owners are not caught by surprise by local draconian ordinances that severely curtail their rights when they cross the street and happen to leave one municipality or city and enter a different one," explained the Law Offices of Katz & Phillips, P.A. via a blog post.

The law was further strengthened in 2011, as the Republican-controlled Florida Legislature added a fine of up to $100,000 for local governments and up to $5,000 for local elected officials who violated the law. However, after the tragic shooting in 2018 at Marjory Stoneman Douglas High School, which left seventeen dead, a trial court sided with the local governments and essentially scrapped the penalty language. That decision was then overturned on appeal.

Now the issue is heading to the Florida Supreme Court after the state's Agriculture Commissioner Nikki Fried, a Democrat who is also running for governor to challenge DeSantis, used her office to urge the highest court in Florida to take up the case.

"The Supreme Court's decision to hear our appeals to uphold the constitutionality of the penalty provisions in the preemption of firearm regulation statute is a win for home rule and local control," Fried said in a statement. "Once again, Florida Republicans are attempting to punish local governments for taking actions that are completely within their jurisdiction to protect their communities."

Florida Attorney General Ashley Moody, a Republican representing the state, already filed a brief last month that argued the Florida Supreme Court should not consider the case, in part she argued, because, the appeals court correctly ruled that the state has the legal authority to preempt gun regulations and punish local officials who violate that law.

While the case could certainly impact those living in Florida, it could also have far wider-reaching consequences. As Politico also reported, the timeline for the ruling could come during what is expected to be a heated mid-term next year. In addition to the expected reelection campaign for Gov. DeSantis, Republican U.S. Sen. Marco Rubio (R-FL), as well as the entire three-member Florida Cabinet, are also seeking reelection.

However, as has been seen in past battles calls for gun control have had a way of backfiring—so perhaps these cases could be a win for supporters of the Second Amendment regardless of how the court rules.