Will This Giant Chinese Antenna Trigger An Environmental Backlash? 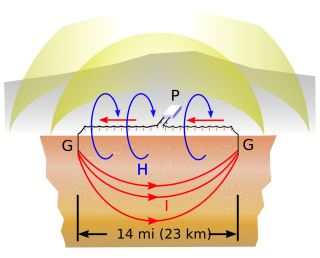 What do we know about this giant Chinese military antenna?

It is built on 1,400 square miles of land, which makes the facility almost five times bigger than New York City.

It emits extremely low frequency, or ELF, waves. Which is how the U.S. Navy once communicated with nuclear submarines sailing deep below the ocean surface.

And just like in the United States, China’s Project WEM (Wireless Electromagnetic Method) might spur an environmental backlash.

The Chinese government portrays WEM as a civilian project. “Although the project has civilian applications—officially it will be used for earthquake and mineral detection and forms part of China’s eleventh five-year plan—it could also play a crucial role in military communications,” according to The South China Morning Post. “Scientists said that its transmissions could be picked up by a submarine lurking hundreds of meters under the sea, thus reducing the vessel’s risk of having to resurface to receive transmissions.”

Yet some scientists have linked ELF waves to cancer. A U.S. Navy ELF transmitter in the Midwest, built at the end of the Cold War, drew protests from local citizens. This may be why the Chinese government is keeping the location a secret.

“Apart from the need to protect an important strategic asset, some researchers said that the secrecy was to avoid causing public alarm,” said The South China Morning Post. “The exact site of the facility has not been disclosed, but information available in Chinese research journals suggests it is in the Huazhong region, an area in central China that includes Hubei, Henan and Hunan provinces and is home to more than 230 million people—greater than the population of Brazil.”

China’s supersized version of Project ELF is a “pair of high-voltage power supply lines stretching from north to south, east to west on steel lattice towers, which form a cross that is sixty kilometers (thirty-seven miles) wide and eighty kilometers to one hundred kilometers (fifty to sixty-two miles) long,” according to The South China Morning Post.

“At the end of each power line, thick copper wire goes underground through a deep borehole. Two power stations generate strong currents and electrify the ground in slow, repeating pulses, turning the earth underfoot into an active source of electromagnetic radiation. The radio pulses not only pass through the atmosphere, but travel through the Earth’s crust as well, with a range of up to 3,500 kilometers (almost 2,200 miles), according to the project scientists. A sensitive receiver within that range, which is roughly the distance between China and Singapore or Guam, would be able to pick up these signals.”

The Chinese antenna will transmit on a frequency of between 0.1 and 300 hertz, Chinese scientists told The South China Morning Post. Unlike UHF or VHF, the long ELF radio waves—as in thousands of miles long—can penetrate into the depths of the ocean, mitigating one of the drawbacks of modern submarines: sailing deep amid the vastness of the ocean makes it hard for the enemy to detect and destroy these subs, and also makes it hard to communicate with them. ELF signals don’t have the capacity to transmit much information, but they can be useful for simple commands, such as issuing the go signal to launch nuclear missiles.

In the 1960s, the U.S. Navy’s proposed Project Sanguine would have turned almost half the state of Wisconsin into a vast ELF transmitter that could communicate with submarines. It ultimately settled for Project ELF, which comprised two linked transmitters on eight acres of land in Michigan and Wisconsin. The site, which operated from 1988 until 2004, was dogged by protests from neighbors and environmentalists. U.S. Navy submarines today must either surface to communicate or use relay transmitters such as buoys.

The Chinese Navy maintains that “a person standing on the emission site would be subject to ELF radiation no greater than 10 watts, enough to power up several LED light bulbs,” according to the Post. But China’s environmental regulators have their concerns: The Ministry of Ecology and Environment “has asked for a comprehensive review on its environmental impact—a request that has not been granted.”

What’s interesting isn’t that China is building an ELF submarine communications system. That technology has been around for decades. But noteworthy is that a Chinese newspaper—even one based in the semi-autonomous Chinese city of Hong Kong—is giving plenty of attention to environmental concerns regarding a strategic military project.

The biggest threat to Chinese security isn’t U.S. aircraft carriers, but decades of unrestricted industrialization that have polluted China’s air, water and food supply. Whether public concerns about the effects of ELF waves will sway China’s military is questionable, but it’s a question that is beginning to be asked.