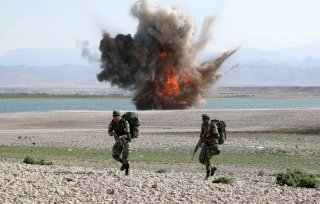 Tensions are flaring between Baku and Tehran after Iran’s Islamic Revolutionary Guard Corps (IRGC) launched widespread military drills in a show of force along their shared border. Iran’s exercises mark the first time in Azerbaijan’s thirty years of independence that a foreign state has directly threatened its sovereignty. Although Iranian officials claim the drills were aimed to protect “regional security,” they strongly insinuated that the real catalyst was the strengthening of Israeli-Azerbaijani ties. Iran, the champion of using proxy warfare to further its foreign policy, is fearful that Israel could be employing the same tactic by building a formidable base in the Caucus region.

Baku has always shared warm relations with the Jewish state. Azerbaijan has purchased billions of dollars of weapons from Israel, and Israel imports nearly 40 percent of its oil from Azerbaijan. From 2011 to 2020, Israel accounted for 27 percent of Azerbaijan’s imports of major arms. While the details of the specific weapons purchased have not been publicized, Azerbaijan’s president Ilham Aliyev said that his country acquired $4.85 billion in defense equipment from Israel in 2016 and used Israeli-made drones in the 2020 Nagorno-Karabakh conflict. Following Tehran’s military drills on its border with Azerbaijan, photos circulated of Aliyev posing with an Israeli-manufactured kamikaze drone. This act was likely in response to Iran’s threat to Baku over its relations with Israel.

In Tehran’s eyes, Azerbaijan’s military strength and collaboration with Israel threaten its national security. In April, Iran reported that it arrested “Israeli spies” along its shared border with Azerbaijan, highlighting the regime’s paranoia that Baku is aiding the Jewish state in anti-Iran operations. The Iranian foreign minister mirrored this rhetoric by expressing that “the Islamic Republic of Iran does not tolerate the presence and activities of the Zionist regime against its national security and will take necessary action in this regard.”

While Iran worries about the kinetic implications that enhanced Israeli-Azerbaijani relations could yield, regime officials are also concerned about being left out of the regional geopolitical picture. In addition to allying with Israel, Baku works closely with Ankara. Iran views Turkey as its competitor and is weary of the growing influence it holds in the region. Azerbaijan and Turkey have been historic allies as both countries share close cultural ties and Turkish heritage. Ankara and Baku also share economic interests that sideline Tehran. The Baku-Tbilisi-Ceyhan pipeline was initially built by Ankara to exclude Iran from critical regional infrastructure enterprises. The pipeline transports Azerbaijani oil to Turkey vis-à-vis Georgia, which eliminates the use of the Persian Gulf and the need for Iran’s participation. Although Israel and Turkey maintain a murky relationship at best, a potential Azerbaijan-Turkey-Israel coalition could pose a serious threat to Tehran.

In the age of the Abraham Accords and the Al-Ula Declaration, Iran has been excluded from and targeted by regional alliances. The historic peace deals signed in 2020 known as the Abraham Accords normalized Israeli relations with the United Arab Emirates, Bahrain, Sudan, and Morocco. Shortly after, the Gulf Cooperation Council signed the Al-Ula Declaration, nicknamed the Gulf “solidarity pact,” in early 2021, which symbolized a united Gulf front. Both sets of peace agreements demonstrate shifting alliances in the region and have consequently pushed Iran further into isolation. Although the strengthened Israel-Azerbaijan partnership gravely concerns Tehran, the regime is likely unwilling to completely sever its ties with its Caucasus ally by escalating the conflict on the border.