Will Iran Attack the U.S. Al-Harir Air Base in Iraq? 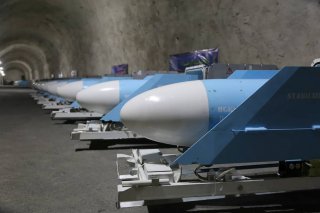 After Iran’s missile attack on Iraq’s Ayn Al-Asad air base on January 8, 2020, new speculation suggests that Tehran is planning to target Al-Harir base, where U.S. forces are present, if Iranian Kurdish opposition groups do not vacate it.

Al-Harir airfield base, located 70 kilometers northeast of Erbil and 115 km from Iran’s border, was first used by the United States against Saddam Hussein’s forces at the onset of the Iraq War before being turned against ISIS and other terrorist groups more recently. According to some reports, Iranian Kurdish opposition groups have deployed to Al-Harir and now control part of the base.

Recently, Americans expanded the Al-Harir base in Iraqi Kurdistan.” The expansion of the base includes the construction of underground shelters and several warehouses,” An Iraqi defense intelligence officer told the New Arab newspaper.

Given Al-Harir’s proximity to the Iranian border, the Islamic Republic is concerned about suspicious activities at the base, which hosts Iranian Kurdish opposition groups. Nour News, a semi-official website close to Iran’s National Security Council, reported recently that the base is “equipped with defense systems, attack fighters, advanced radars, and American eavesdropping systems.”

The Islamic Republic recently increased its threats against opposition groups in Iraqi Kurdistan, especially at the Al-Harir air base. A month ago, the Islamic Revolutionary Guard Corps (IRGC) issued a stark warning to Iraq’s Kurdistan Regional Government (KRG) over the presence of Iranian opposition groups in its territory. Following that warning, which was issued by IRGC Ground Force commander Brigadier General Mohammad Pakpour, the IRGC struck several hideouts being used by anti-revolutionary groups in Kurdistan on September 9, 2021.

It seems now that Iran may target Al-Harir air base to remove the Islamic Republic’s enemies from locations where American military forces are deployed.

The chief of staff of the Iranian Armed Forces said the American Al-Harir military base in Iraq is a den of conspiracy against Iran that must be abolished. “Iran continues attacks against anti-revolutionary groups in the region, especially the Iraqi Kurdistan region,” added General Mohammad Baqeri on September 20, 2021.

In February 2021, Al-Harir air base was attacked by a Shi’ite militant group called Saraya Awlia al-Dam, which killed a U.S.-led coalition contractor and injured at least nine people. Some outlets called the group a pro-Iranian armed force and rebuked Iran for galvanizing its proxy forces to damage the Americans and Iranian Kurdish opposition groups at Al-Harir.

But Iran’s Foreign Ministry Spokesperson Saeed Khatibzadeh said in a statement that Iran condemns “suspicious attempts to link the Erbil attacks to Iran.”

Recently, Tasnim News Agency, an outlet under the IRGC, suspiciously asked, “Is the fate of Ain al-Assad air base waiting for the Al-Harir base?”

“The Al-Harir Base is one of the US bases in northern Iraq that has turned into a place to train and support the anti-revolutionary forces in recent years. Iranian officials have urged the Iraqi officials to expel US troops from the Al-Harir base. Iran’s armed forces have repeatedly demonstrated that they will do anything to protect the territorial integrity, independence, and security of Iranians, even attack American bases as happened in the al-Assad airbase,” Tasnim stated.

Iran knows that the United States and Iraq have agreed recently to reduce U.S. combat units in Iraq by the end of September, and the threat of attack on Al-Harir would be a signal from Iran to the Americans that they must start withdrawing from the Iraqi Kurdistan province near Iran’s border.

About 2,500 American troops are in Iraq currently. Some analysts believe that the U.S. withdrawal from Iraq, especially from Kurdistan, will allow the IRGC to benefit from the power vacuum by removing Iranian Kurdish opposition groups entirely from its neighborhood.

Moreover, Iran’s threat against Al-Harir amounts to a message to Americans to accelerate their withdrawal from Iraq after leaving Afghanistan.

Some reports accuse Iran of providing military support to Iraqi militias in a bid to accelerate America’s exit from the country. Yet Iran has denied that it is galvanizing militants to harm American troops and assets in recent years.

After the Trump administration’s assassination of top Iranian general Qasem Soleimani, the IRGC announced that Iran is seeking the total withdrawal of U.S. troops from the Middle East.

However, on the other side, Iraq’s Kurds want U.S. troops to stay in the country. They fear that, following the U.S. withdrawal, Iran will convince the Iraqi central government to crack down on Iranian Kurdish opposition groups operating in the KRG.

While President Joe Biden says that U.S forces will end their combat mission in Iraq by the end of the year, it remains to see whether Iran will attack the base to accelerate the U.S. withdrawal, upping the pressure on the United States and taking the fight directly to Iranian Kurdish opposition groups.