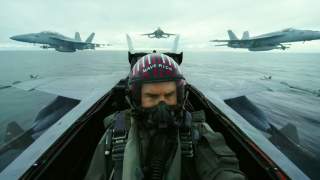 The second sign Iran could be the bad guys is geography. In the trailer, there are some incredible shots of Navy F/A-18E/F Super Hornets flying over deserts and mountainous terrain, some of it covered in snow.

Now that we’ve all had a week or so to process the incredible official trailer for the sequel to the 1986 film classic, it’s time to ask a question sure to pique the interest of many fans in the days, weeks, and months to come – who will be the ‘bad guys’ in Top Gun: Maverick?

The original film raised the same discussion due to the way it left the antagonists intentionally obscure. A Task & Purpose article once examined the issue in great detail, so it’s only proper to do the same for the latest entry in the franchise, set for release summer next year. Given what we know about how they handled this particular facet of the film in the first installment and what we know about Hollywood’s tendencies in this sort of situation, we can take a fairly wild, yet educated guess, and probably end up being right. Or not.

But with the film still a year away, this writer will go out on a limb and make that wild, educated guess and say the villains in Top Gun: Maverick will be none other than… wait for it… Iran. Yes, the Islamic Republic, that big country bordering Iraq and the Persian Gulf. It just won’t be made obvious.

The most glaring indication of Iran’s starring role is the F-14 Tomcat that appears at the end of the trailer. Though said time and again, it’s worth reminding everyone the United States hasn’t flown the Tomcat since 2006 and the only country in the world that operates them is Iran. Though their collective airworthiness is speculative, Persian ‘Cats’ are still very much a part of the Islamic Republic of Iran Air Force (IRIAF), so it’s not much a stretch to say they still have a key role to play in any military scenario.

More on the F-14 later. For now, let’s move onto another aircraft still operated by the IRIAF – the F-5E Tiger II. An aircraft originally designed in the 1950s and then acquired by then-Imperial Iran during the proceeding two decades, it was also made famous in the first Top Gun. However, it starred not as itself, but as the “bogey,” the MiG-28, a fictional Soviet-built fighter aircraft posing a formidable threat to the powerful Tomcat.

The filmmakers obviously took creative license with the F-5, due to both political sensitivities (more on that later) and the obvious difficulties filming aerial footage of authentic Soviet-built fighters. But for the purposes of the sequel, portraying the F-5 as the MiG-28 actually works out should the filmmakers select Iran as the nemesis. Since the Navy still operates the F-5s as part of their adversary squadrons, they could be repainted in enemy colors once more and, with Iran still flying Tigers, the MiG-28 could very well make a comeback in the sequel. In the end, two aircraft – one real (F-14) and one fictional (MiG-28), could rise into prominence once more.

The second sign Iran could be the bad guys is geography. In the trailer, there are some incredible shots of Navy F/A-18E/F Super Hornets flying over deserts and mountainous terrain, some of it covered in snow. Much of the film is said to have been shot in central and eastern California, as well as northwest Nevada, near the present-day real-life home of TOPGUN, Naval Air Station Fallon. However, the movie’s likely to involve a climactic battle of some kind, so it’s possible the deserts and mountains of California and Nevada could also serve as stand-ins for some other country the U.S. has no right to film in.

Despite being a Middle Eastern country, Iran is actually quite varied in terrain. A look at this map shows multiple large, lengthy mountain ranges alongside Iran’s many deserts. Many of these mountains also see snow. Interestingly enough, the geography America’s Top Guns spend their training time overflying reflects much of the geography of present-day and potential real-world operations.

Speaking of the real world, Iran would make a relevant antagonist for the sequel. Long before the events in the Strait of Hormuz dominated the news headlines, there was talk of a confrontation brewing on the Persian Gulf horizon between Washington and Tehran. The situation has clearly taken a turn for the worse in the past few months, but there were plenty of indicators a year or two ago that events were heading the direction they have, especially with the Trump administration signaling a hard line against Iran from the beginning. Therefore, if the filmmakers were looking for bad guy, there were few better options than the Islamic Republic. Though Russia and China (to a lesser extent) have tended to be Hollywood’s historic go-to villains, the likelihood of calling out America’s biggest and most powerful geopolitical adversaries is risky business. Even picking on a lower-end enemy, such as North Korea, carries its risks, as Sony Pictures discovered in 2014 after the release of The Interview.

Which is why even if Iran is the antagonist of Top Gun: Maverick, it’ll most likely be implied, rather than specified. With relations between the U.S. and Iran at an all-time low, ensuring the movie doesn’t add fuel to a steadily-growing fire is likely a critical part of the agreement between the Department of Defense and Paramount Pictures governing military support for the production. In fact, the movie will probably stick to the precedent set in the predecessor and mention no country at all. Part of the first installment’s lore is that writers had tapped North Korea as the antagonists, but later went the ambiguous route to avoid further damaging relations with Pyongyang.

As explained by Brad Howard of Task & Purpose, the “other side,” which is how Maverick’s Commanding Officer referred to the enemy at the end of the original, was a “combination of three countries… ingeniously done by combining impossible geography, mismatched markings, and fictional aircraft.” Viewers will have to wait and see precisely how the writers will present the enemy this time around, but they will likely follow the same formula. But this is where the appearance of the F-14 (and, potentially, the F-5) could prove complicated. Because Iran is the only operator of the F-14, there’s a certain concession to be possibly made that audiences will connect the dots and see that the villain of Top Gun: Maverick is indeed intended to at least mimic Iran, all because the Tomcat flies once more in the present day.

One thing’s for sure. Maverick will fly the F-14 once again; the question is, under what circumstances? If set photos leaked last year are any indication, it won’t be off the deck of an aircraft carrier, but from an airfield somewhere, in terrain that appears both mountainous and snowy. And, as the trailer indicates, an F-14 will be flying over the same kind of territory as well.