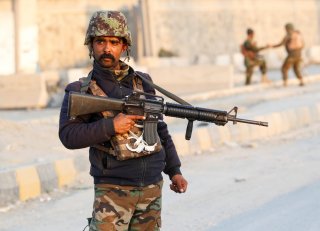 Last week, in a bid to revive the floundering Afghan peace process, U.S. Secretary of State Antony Blinken wrote a letter to Afghan President Ashraf Ghani. Adjacently, an eight-page peace plan was also shared with the Afghan government, opposition parties, civil society, and the Taliban. Among other things, the peace plan calls for the formation of an interim “peace government” for two years; forges guidelines for talks between Afghan political leaders and the Taliban in Turkey; a United Nations-led meeting of India, Pakistan, Iran, Russia, China and the United States to create regional consensus on Afghanistan; and a ninety-day reduction in violence.

Read together, the two leaked documents provide critical insights into the Biden administration’s mindset and broader aims in Afghanistan. The leaks are deliberate to garner reactions of regional powers, Kabul, and the Taliban, before finalizing Biden’s official Afghan policy.

The proposed peace plan is a high-stake political gamble that is fraught with multiple contradictions and risks. The plan contains a laundry list of items against an unrealistic and a limited time window. Presently, the Biden administration is split between political appointees who advocate ending America’s longest war by declaring success on the twentieth anniversary of 9/11 and military and intelligence careerists who oppose a premature declaration of victory.

Some experts are comparing the proposed peace plan with the 2001 Bonn Agreement, which took place in Germany and put in place the current political order in Afghanistan. The apparent difference is that Bonn Agreement 2001 excluded the Taliban from talks, while the current plan is inviting them to the negotiation table in Turkey.

First, by choosing Turkey as the venue for Afghan peace talks, the Biden administration has pulled the plug on the Doha process. Turkey is part of NATO’s mission in Afghanistan, and, unlike Qatar, it can observe ceasefire compliance on the ground. Furthermore, Turkey can work closely with the United States, which is trying to mend ties with Ankara destroyed by the Trump administration, and Pakistan. Ankara is planning to host the first meeting of Afghan peace talks in April.

Second, the peace plan exposes the Biden administration’s policy paralysis and limited policy options in a highly complex conflict situation. For instance, an extended stay is a recipe for more conflict. At the same time, an exit without a political compromise between Kabul and the Taliban will hasten the collapse of the current political order in Afghanistan.

Third, Biden is desperately looking for an exit strategy by installing an interim political setup, no matter how untenable, to provide a semblance of stability and give the United States some face-saving in Afghanistan. Arguably, if the Geneva, Peshawar, and Mecca accords are anything to go by, it is quite evident that it is not difficult to get a deal in Afghanistan. However, what happened after these deals is more critical, i.e., Afghanistan descended into never-ending chaos.

The tone and tenor of Blinken’s letter marks a sharp shift in the Biden administration’s initial accommodative messaging to Kabul. The language of the letter is significant as it asks Ghani to “join other Afghan stakeholders” in the efforts to create an interim government in Turkey. Alongside the Taliban’s rising violence, the Biden administration views Ghani’s inflexibility towards forming an interim government as a major hurdle to peace efforts. In other words, the United States is asking Ghani to show flexibility or step aside. This letter will further weaken the embattled Ghani and his team.

Notably, the Biden administration has not tied the status of the U.S. military presence in Afghanistan with the peace plan and its outcomes. By not committing its troops to the peace process, the United States is keeping its options open for three potential outcomes. Firstly, if Kabul and the Taliban reach a peace agreement in the next few weeks, it will allow the Biden administration to withdraw the remaining 2,500 forces by May. Alternatively, if there is promising progress in peace talks with chances of a genuine breakthrough, the United States could stay beyond May 1, signaling to the Taliban that the troops would leave as soon as the agreement is reached. On the other hand, if the peace process flounders and talks breakdown, the United States has the room to retains its troops’ presence in Afghanistan indefinitely. Also, by keeping its withdrawal plan ambiguous, the United States hopes to build some leverage with the Taliban.

The Taliban has not given an official reaction to the peace plan; they are still reviewing it. However, the Taliban are unlikely to agree to a ceasefire before the agreement is finalized. The Taliban are a violent entrepreneur and violence is their only leverage to stay relevant to the Afghan endgame. So, they will not give up on violence until they secure a favorable settlement suiting their interests. Furthermore, before resuming talks, they will exploit Biden’s desperation to extract more concessions, such as the release of more Taliban detainees.

Historically, Afghanistan has been the agent of change in South Asia. So, what happens in Afghanistan has far-reaching implications on the region, particularly Pakistan. Given the divergent strategic outlooks, competing interests, and diametrically opposed positions of India and Pakistan on the Afghan conflict’s potential solution, it is anybody’s guess that Biden’s plan to forge regional consensus in a few weeks is a non-starter.

Even the best laid out plans can fail, and the worst ones can succeed. So, the hope for peace should never be abandoned. However, given the complexity of the ground situation and fragility of the United States’ proposed peace plan, violence is likely to rise in Afghanistan. The peace proposal is comprehensive, and it has the potential to deliver peace dividends only if it is not rushed. By focusing on deadlines instead of ground realities, the United States runs the risks of compromising twenty years of democratic gains in Afghanistan.

Will the Taliban Hold Up Its End of the Afghan Peace Deal?