Will the Latest Clashes Upend Nagorno-Karabakh's Path to Peace? 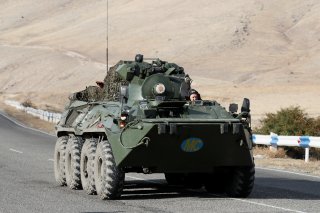 Earlier this year, Armenian prime minister Nikol Pashinyan and Azerbaijani president Ilham Aliyev met to discuss a framework to resolve the Nagorno-Karabakh conflict. The meeting was not well received in Armenia, and thousands of citizens gathered to protest their government’s recent negotiations with Azerbaijan. Despite the protests, the Armenian government continued to meet with its Azerbaijani counterparts.

Progress was made. In July, the foreign ministers of Armenia and Azerbaijan met in Georgia to discuss the next courses of action in Nagorno-Karabakh. During the meeting, they debated a plan for withdrawing Armenian forces from Nagorno-Karabakh and discussed how to normalize relations.

Following this session, Armenian officials announced they would “withdraw all remaining military units from Nagorno-Karabakh by September.” Residents of the Lachin region were told “they need to leave their homes” before September and that the Karabakh government would provide vouchers worth up to $25,000 to households forced to relocate. It was also announced that Azerbaijani forces would retake control of the area, an item that was outlined in the Armenian-Azerbaijani ceasefire agreement signed in November 2020.

The international community was swift to comment on these events. The United States urged Armenia and Azerbaijan to “reduce tensions and avoid further escalation” in Nagorno-Karabakh. Similarly, representatives from the European Union called for an immediate de-escalation in the region. Finally, Turkey and Russia voiced their concerns over the renewed skirmish, with the latter vowing to “stabilize the situation.”

As the situation develops, it remains to be seen how these international actors will help resolve the conflict. Numerous ceasefire agreements have been violated, and thousands of Armenian and Azerbaijani soldiers and citizens have been killed. The United States and European Union have sent millions of dollars in financial and humanitarian assistance, but this has not ended the conflict. Similarly, Turkey and Russia were instrumental in the 2020 ceasefire negotiations, but this agreement has constantly been violated. Russia even deployed peacekeepers to the region, but this has not alleviated tensions between Yerevan and Baku.

Now, an aura of uncertainty surrounds the conflict. While Armenian and Azerbaijani officials have continuously spoken with their counterparts from the United States, the EU, Turkey, and Russia about the ongoing Nagorno-Karabakh conflict, talks have failed to resolve these tensions. Due to these failed negotiations, some experts have predicted that the “likelihood of renewed war in Nagorno-Karabakh is high” and that the “chances of yet another war seem more plausible than a peace treaty.”

Based on these concerns, the international community must re-engage in the Caucasus. One potential solution would be to introduce additional peacekeeping forces to the region. To date, the Russians have a few thousand soldiers deployed in Nagorno-Karabakh. Recent reports, however, revealed that Karabakh residents have questioned the effectiveness of Russian peacekeepers in the region. If the Organization for Security and Co-operation in Europe sent a multi-national peacekeeping force to the region, it could help with the negotiation process and limit the risk of renewed skirmishes between Armenia and Azerbaijan. These countries have made progress in their renewed discussions, and a larger peacekeeping force could help see these recent agreements to their completion.

Second, the international community should encourage negotiations between Armenian and Azerbaijani leaders. The recent EU discussions made some progress. Both countries discussed a potential withdrawal of Armenian forces from the region. Another provision could see these countries establish new trade routes. Should this be implemented, it would lead to greater economic growth and create new opportunities for both countries.

Finally, Armenia and Azerbaijan should strive to build their relationships with the major powers in the region. Collaborating with Turkish and Russian mitigation forces could lead to the establishment of new socio-economic and political opportunities in the Caucasus. The “delineation of borders” would also allow for greater movement and travel within the region.

Overall, the ongoing discussions surrounding the Nagorno-Karabakh conflict have been a long and challenging process. Resolving these tensions will not come overnight, but the international community must do everything it can to serve as an intermediary during these negotiation processes. Ensuring that Armenia and Azerbaijan fulfill the provisions outlined in the newly established peace plans will help ease tensions and could slowly lead to normalized relations. It will not be easy, and it will take time, but the international community must try. After all, a successful peace plan would save thousands of lives.

Mark Temnycky is an accredited freelance journalist covering Eastern Europe and a nonresident fellow at the Atlantic Council’s Eurasia Center. He can be found on Twitter @MTemnycky.