Will Past Security Cooperation Success Lead to Future Failure? 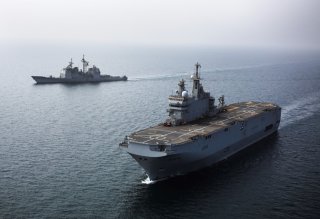 At the beginning of September, the Pentagon announced a task force to discover avenues to speed the process of delivering weapons to America’s partners and allies by examining the steps within the process and removing inefficiencies. A timely announcement, given the pressing need to quickly provide combat equipment to Ukraine and the recent indicators of the spread of Chinese influence in the South Pacific. But, if the task force’s goal is to compete with Beijing, it must first address the anchor weighing down the United States in the competition for arms sales and global influence—the historically successful security cooperation process.

American security cooperation—all Department of Defense interactions, programs, and activities with foreign security forces and their institutions aimed at promoting U.S. interests—really came of age after World War II when the United States provided $400 million of security aid to Greece and Turkey to counter Soviet expansion. Since its focus was Soviet containment, this burgeoning security cooperation enterprise focused on the countries most important in this effort—western European ones.

What started in Europe was perfected in the Pacific after the United States and Japan signed the U.S.-Japan Mutual Security Treaty and the U.S. government stiffened its opposition to the spread of communism in Southeast Asia. Efforts across these two fronts drove the United States to become the world’s security cooperation leader. Today, senior Japanese and Western European officers work in American headquarters buildings and train alongside American personnel at the formative stages of their careers, creating highly interoperable forces, and in some cases, interchangeable ones.

In pushing these partnerships to unprecedented heights, the American security cooperation enterprise grew to best support these partners—and it has largely stayed that way. In the meantime, the United States established processes to favor historical allies concerning the weapons systems offered and approved and access to training programs that allow them to absorb advanced technologies more quickly.

The repercussions of this system became evident during the initial stages of Russia’s invasion of Ukraine when the Ukrainian government requested that the United States provide advanced fighter aircraft to help stem Russian advances. Unfortunately, it became apparent that due to their unfamiliarity with American equipment, Ukrainian airmen would take months to years to be able to operate, maintain, and sustain American fighters. Even if they did not operate F-16s, our traditional allies would have been able to absorb them into their force much more seamlessly than the Ukrainians would have been able to.

Since 1973, the Eightieth Training Wing at Sheppard Air Force Base has trained European pilots from countries including the United Kingdom, Spain, Norway, and Germany. The Wing hosts instructors and staff officers from partner countries and produces approximately 200 pilots annually. However, much like the American security cooperation process in its entirety, the program has been slow to expand beyond America’s traditional roster of partners. You won’t find any officers from now critical countries playing a pivotal role in a changing world among the Eightieth’s list of graduates.

In contrast, China’s security cooperation efforts are a relatively new phenomenon born of the need to protect increasingly scattered economic interests and citizens. It was first officially mentioned in President Hu’s final report to the Eighteenth Party Congress as general secretary and represented a departure from China’s policy of non-interference. Protecting overseas citizens has driven China’s People’s Liberation Army and its Ministry of Foreign Affairs to become involved in security developments outside China’s borders.

Since then, Beijing has adopted an “as needed” security cooperation policy, essentially free of historic security relationships. They are partnering with Sri Lanka to garner Indian Ocean access, with African nations to secure access to natural resources, and with the Solomon Islands to expand its control over the South Pacific’s waterways. All regions policymakers in Washington have traditionally ignored in favor of countries with whom we have long-standing relationships. While Beijing is prioritizing relationships that can help it now, we continue to prioritize relationships that helped us in the past.

The views expressed are those of the author, not the Department of Defense or the U.S. Navy.

Chet Lee was the 2021-2022 Navy Federal Executive Fellow at the Chicago Council on Global Affairs’ Lester Crown Center. He is an active duty Foreign Area Officer in the U.S. Navy.