Will Pictures Like This Make You Ration Your Food During the Coronavirus Crisis? 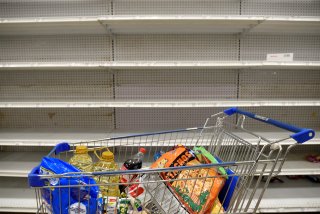 Food security is no laughing matter at the best of times, but I gasped when I first read the Department for Environment, Food and Rural Affairs’ (Defra) annual food civil contingencies infrastructure report in 2018. It is barely a page long (in public at least) and assures us everything is OK and that the food system is resilient and able to withstand shocks. As the coronvirus racks the nation and panic buying continues, this complacency is about to be tested.

Few analysts of the UK food system are anything other than sober about its fragility. There is little storage. All operates on a just-in-time basis in which food travels down the supply chain – literally, just in time for when the next link or process needs it. Food businesses have been realigned to cut delays and storage. Consumers have come to expect constant flows of food, without hiccups or gaps. New industries have emerged, notably logistics and satellites which track this all from farm to shop. We are trucker-dependent now.

Only 53% of food consumed in the UK is produced in the country. Others feed the Brits. Some scientists calculate that UK external dependency is even greater, with hidden use of external land to provide animal feed.

While this distortedly efficient food revolution has been rolled out, the UK food trade gap – the difference between exports and imports by value – has widened. In 2018, food worth £46.8 billion was imported, with exports worth only £22.5 billion, leaving a food trade gap of £24.3 billion. Much of the imports are vital for health, the £10bn imports of fruit and veg in particular. UK fruit and veg growing has sunk. The UK’s main “oral” export these days is whisky. Even meat – supposedly Britain’s forte – is in the red. If borders close or supply chains snap, what then?

What about actual food?

Putting money to one side, UK self-reliance has been slowly dropping for decades from a high point in the early 1980s. I was among academics warning the government in 2017 to beware a no-deal Brexit, as the management of ceaseless flow of food mostly through Dover and the channel tunnel is coordinated by the UK’s giant supermarkets. Just-in-time systems are easy to disrupt. The retailers privately expressed alarm to the government but the no-deal posturing continued. It ought to have led the government to prepare serious change, to put the country’s food flow on a secure footing. This did not happen.

A year later, another report argued that UK food security was more fragile than most people think. It too was dismissed initially by the government, only for ministers to U-turn within days and admit ships were being chartered, including from a company which owned no ships.

Now coronavirus exposes other difficulties and deep structural weakness. It is almost as though a web of supply – from land and sea via processing, distribution, retailing and food service to consumers – was designed to undermine, not just ignore, resilience.

If food security refers to continuity of supply sufficient to meet health for all, resilience means it being able to bounce back under threat, and food capacity means having the skills, technology, planning and preparedness to do it.

The current UK food system is already weak in all senses, and has been for too long. Food and agriculture account for one-quarter of greenhouse gas emissions. They are also the biggest drivers of biodiversity destruction, huge users and polluters of water, and the major driver of much illness from noncommunicable diseases and food-borne pathogens, too. The UK consumes the highest rate of “ultra-processed” foods of any country in Europe. No wonder our obesity rates are alarming and the NHS under stress.

Food is the UK’s biggest employer with 4.1 million workers. There’s a feeding frenzy over who can make the most money from food. Currently, this is a battle between retailers, processors and food service, each taking about one-quarter of the £120 billion from the £225 billion that consumers spend on food and drink annually. The new kid on the block is home delivery – Deliveroo, Uber, Just-Eat for example – which now takes £10 billion from the £225 billion, almost as much money as farming.

The UK government believes home deliveries will enable people to self-quarantine at home during coronavirus. If one in five workers go ill, this strategy might fail, as they are often self-employed, so unable to claim sickness benefit and incentivised to keep working working to pay the bills – potentially spreading disease not protecting people from it.

Food for all the people

A crunch point for UK food policy and planning is surely approaching. The coronavirus crisis is already spawning worrying actions. Whereas under Brexit no-deal threats, stoicism ruled and “preppers” – people stocking up – were generally few. Today shelves are being stripped and queues form for supermarkets to open. It’s why colleagues and I have called on the UK prime minister to set up a rational system of rationing – based on health, equity and decency – to see the country through this crisis.

The just-in-time logistics system is being stretched. This is why retailers are planning to prune supplies to bare essentials and are rationing. If this is happening with government approval, it is surely an abandonment of democratic responsibility. If not, is government not in control? For people on severely low incomes, meanwhile, reliance on food banks is creaking. Donations are down. We are clearly not all in this together.

Coming weeks and months will stretch government and industry credibility, and also the public. It is a test of identity and whether the national interest really could mean all the people. We ought to be preparing a long-term redirection of the food system. However, the current agriculture bill before parliament doesn’t suggest that. Instead, it’s an economist’s bill mainly designed to redirect subsidies around the as-yet-untested notion of “public money for public goods”.

Food production and equitable distribution barely feature. We ought to be demanding that Public Health England and the devolved administrations in Edinburgh, Cardiff and Belfast revise the Eatwell Guide, our national healthy eating guidelines, around sustainable diets, combining health, environment and social criteria such as affordability. These are what should drive production and determine rationing, if circumstances deteriorate.

Meanwhile, it is the food retailers who are beginning to ration supply. This is unacceptable in a democracy. If to happen, it ought to be in the open – and guided by health and sustainability. Surely the “public good” lies in feeding all well, according to need not income. Those values are what got the UK through the second world war, as our Churchill-inspired prime minister ought to know.

Tim Lang is a Professor of Food Policy at City, University of London.