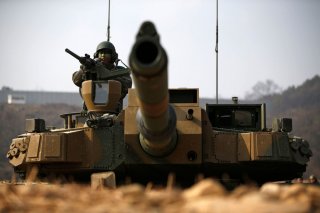 Key point: Seoul's vaunted K2 is one of the finest tanks ever made. Here's why Poland would buy it to defend against Russia.

On January 17, 2020, The Korea Times reported that the Korean industrial concern Hyundai Rotem was favored to win an upcoming 9 billion tank development deal with the Polish Ministry of Defense. If the deal goes through, Poland will likely procure and/or build a variant of the K2 Black Panther main battle tank. Korean armored vehicles have seen major sales success recently in Europe, with the Korean K9 Thunder howitzer winning major contracts with Finland, Estonia, and Norway. Poland also procures the K9 in some variants through the AHS Krab program. However, the K9 is built and sold by Hanwha Defense, a different concern than Hyundai Rotem.

While The Korea Times states that Hyundai’s offering is in competition with Russia’s T-90S, Britain’s Challenger 2, and America’s M1 Abrams, only the Abrams seems like real competition to the K2 Black Panther. Given the current geopolitical environment, a Polish-Russian tank sale would be an impossibility, and the Challenger 2 has seen practically no export success and suffers from lackluster armament in most configurations. Variants of the Leopard 2 are not in competition, probably due to the Polish dislike of the support and upgrade options for their existing Leopard 2A4s.

In a competition between the M1 Abrams and the K2 Black Panther, the Black Panther has some advantages. Korea tends to be more willing to license advanced technologies, and a K2 deal could include parts of the K2’s advanced armor technology, production details for the K2’s 120mm L/55 gun, and possibly production of advanced armor-piercing ammunition such as the K279 sabot around. While the US has achieved very good results from it’s 120mm L/44 M256-series of cannons, it’s likely that Poland may not receive the latest ammo tech. Due to the additional barrel length of the L/55, higher velocities and thus higher penetration are easier to achieve.

However, the K2 has some disadvantages compared to the M1 Abrams. The majority of the Abrams’s ammunition, thirty-four or thirty-six rounds, is stored in the turret bustle. Additional ammunition can be stored in the hull, but in peer on peer warfare, the hull box can be left empty to increase survivability, although it also has a blow-out panel. Comparatively, the K2’s autoloader holds less than half of that only sixteen rounds, with the remaining twenty-four of a standard ammo load being stowed in the hull.

The Abrams also has the advantage of already being “available” with the Trophy hard-kill Active Protection System, which is fitted to some M1A2Cs based in Europe. Russia, which Poland perceives as the pre-eminent threat facing it, would field large numbers of Anti-Tank Guided Missiles (ATGMs) in a potential conflict, as almost every Russian IFV is equipped with one, in addition to tank-launched, infantry-launched, and helicopter launched variants, which are all heavily proliferated in the military. An APS could prove critical for survivability in such a battlefield.

But the K2, while lacking its own APS, has the advantage of an integrated radar, which can act as a missile approach warning system and attempt to locate ATGM launch points for the tank crew. However, Poland may option to buy the K2 without this option to reduce the cost of the tank, and integrate their own soft-kill antimissile systems.

Regardless, the competitiveness of the K2 on the export market bodes well for the Korean defense industry. Korean vehicles are competing in almost every major armored vehicle procurement contract around the world. A win for K2 could cement it among other large players on the MBT market.

The author would like to thank Damian Ratka from Nowa Technika Wojskowa for assistance. This first appeared in 2019 and is being reposted due to reader interest.