Will Russia’s War in Ukraine Lead to Starvation in Lebanon? 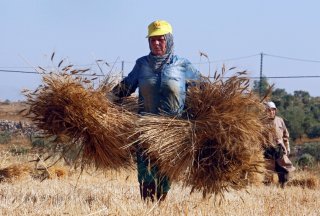 Russia’s month-long siege of Ukraine has caused a shortage in Lebanon’s wheat imports and made searching for a new source of food a national priority. As the conflict progresses, consumers are already feeling the pain of increased prices and the shortage of wheat in the markets. A substitute is urgently needed to mitigate the risk of hunger rising among the population.

Before the fighting started, Lebanon was importing 80 percent of its wheat from Ukraine, and its dependency was steadily increasing. In 2020, Lebanon imported 630,000 tons from Ukraine, compared to 535,000 tons in 2019. At the time, the central bank of Lebanon had decided to delay opening the necessary lines of credits for purchasing wheat, leading several flour mills to stop production because of a lack of financial resources. Lebanon is now on the verge of a bread crisis; the Al-Nahar newspaper reports that at least five ships are waiting to receive their due payments before unloading their cargo in Beirut’s harbor. In light of the recent crisis, Lebanon’s economy minister, Amin Salam, said the government has asked the central bank for a provision of $26 million to open a new line of credit so it can import 50,000 tons of wheat from India. Salam said the country still has a few purchases from Ukraine guaranteed, specifying that 26,000 tons will be arriving next week. After that, though, Lebanon will need to diversify its supply chain.

However, Lebanon’s government is bankrupt and is dealing with a cornucopia of problems, exacerbated by the financial crisis that started in 2019 and the 2020 Beirut blast that left hundreds dead and thousands injured. To make matters worse, the explosion destroyed the mammoth size grain silos that once boasted to carry 100,000 tons of grain. This means that Lebanon, which had the capacity to feed itself for three to four months prior to the explosion, can now only feed itself for a little over a month. The depletion of food reserves has only brought the cost of consumer goods higher, increasing the burden on both citizens and the government. Salam has issued warnings about Lebanon’s dire financial situation, especially since the central bank subsidizes wheat at 100 percent of its cost. At current international prices, the Lebanese central bank is spending close to $20 million a month.

In a statement made to the press, Salam said the state is working with traditional partners like the United States, Romania, and other international donors to help secure 50,000 tons a month of wheat. Yet Lebanon’s partners have been demanding that it reform its political system and tackle corruption before any new aid will flow to the country. In this predicament, however, the Lebanese people are suffering due to their leaders’ unwillingness to do the right thing. The immediate solution to Lebanon’s rapidly rising food prices is to find new suppliers that can fill the import gap created by Russia’s war in Ukraine. Until that happens, Lebanon will need close support from the international community.