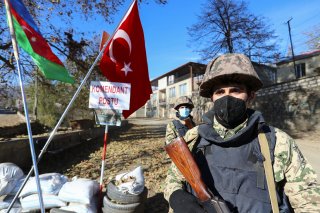 Zero-sum thinking is not in vogue among Western international relations experts. Nevertheless, it is the best description of what happened when Azerbaijani president Ilham Aliyev, Armenian prime minister Nikol Pashinyan, and Russian president Vladimir Putin signed an armistice in the Nagorno-Karabakh region on Nov. 9 following a bloody five-week war.

In an alarmingly successful deployment of hard and soft power, Russia managed in one fell swoop to relegate the West into irrelevance and to assert itself as the region’s indispensable kingmaker.

The agreement represents a strategic setback for the United States. Russia’s brokering of the deal completely sidelined the OSCE’s Minsk Group, the international arrangement by which Russia, France and the United States had previously managed the conflict.  Secretary of State Mike Pompeo’s efforts to end the fighting proved fruitless and underscored America’s dwindling influence in the region.

The agreement’s terms of greatest concern are those that provide for an established Russian military presence in Azerbaijan. According to the deal, nearly two thousand Russian troops, operating as peacekeepers, will now be stationed on Azerbaijan’s territory.

Through previous power grabs, Russia has succeeded in establishing an armed presence in Moldova (Transnistria), Ukraine (Donbas) and Georgia (Abkhazia and South Ossetia). Thus, this is why one former Azeri Defense Ministry official declared, “I don’t know how it will end this time because there is no good example of Russian peacekeepers in the Caucasus.”

While the armistice agreement provides for only a five-year Russian troop deployment, with a military presence in Azerbaijan to match what it already has in Armenia, few believe that the Kremlin has any plans to leave.

This matters for the United States because Azerbaijan is key to freeing Europe from its dependence on Russia for 40 percent and 30 percent natural gas and crude oil imports respectively. This stranglehold on energy supplies to NATO members represents a sword of Damocles hanging over the alliance.

Azerbaijan holds the promise of freeing the West from Russia’s energy blackmail.  An oil pipeline linking Georgia and Turkey was complete in 2006. A gas pipeline corridor to Italy is due to be complete later this month. With this infrastructure in place, Europe can tie into oil and gas supplies from energy-rich Turkmenistan and Kazakhstan via the Caspian Sea from Baku.

To protect its interests and those of its European allies, The United States must re-engage in the Caucasus—and to do that, the Biden administration needs to consider where its predecessors of the last twenty years went wrong.

The Minsk Group should be disbanded. Impotent calls to return to this negotiating framework will not work. It failed both to prevent the outbreak of hostilities or to resolve the dispute.

Countering Russian influence does not require the United States to match its military presence. The Russians bring no money to the table; rather, they exercise power by starving others of investment. Indeed, Russia has already begun turning the economic screws to ensure compliance. On Dec. 17, it banned the importation of Azerbaijani tomatoes—the country’s second-largest export—on the pretense of safety concerns. To weaken Russia’s grip, the United States should focus on trade and investment.

Supporting economic diversification and integration would help to wean the region’s reliance on Moscow. For example, Karabakh used to be a breadbasket of the region back in the Soviet days. Due to the conflict, much of the land now lies fallow. As a global leader for precision farming, the U.S. industry can provide technical expertise and assistance to bring the area back to production and enhance its food security.

Time remains for the United States to salvage its position in the region. And this venture need not be achieved through boots on the ground. Instead, America can show that the way to freedom and security can sometimes be purely economic.