Will Russia Double Down and Build a Base in Occupied Kherson? 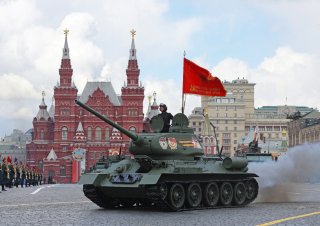 The Kremlin is reportedly considering establishing a military base in Kherson, the latest in Russia’s efforts to bolster its long-term presence in parts of Ukraine.

"We have no such plans at the moment, but the scenario is possible in the future. The plans are up to the Defense Ministry that would coordinate with us. I haven’t got such information yet," Kirill Stremousov, an administrative official with the Russian occupying forces, told Russian state news outlet TASS. Stremousov’s recent statement follows earlier reports that local occupation authorities in the southern city of Kherson are planning to ask the Russian military to establish a base in the surrounding region. "We will ask for this and this is what the whole population wants. This is essential and will be a guarantor of security for the region and its inhabitants,” Stremousov said previously.

The news is the latest indication that Moscow is likely not entertaining plans to fully withdraw its forces from many of the cities currently under Russian occupation and is instead seeking to consolidate control over the eastern half of the country.

Russian forces captured the strategically positioned southern city of Kherson in the opening stages of the war, thus securing a major transit point along the Dnieper river. “The Dnieper is a major transportation artery for Ukraine, and its dams provide power to a lot of Ukrainian industry, as well as civilians. It cuts through the heart of Ukraine. It is for Ukraine what the Mississippi River is for the US,”  Dr. Scott Savitz, a senior engineer at the RAND Corporation, told the Jerusalem Post. “If the Russians attain control of much of the Dnieper River, it enables them to split the country, control the flow of commerce and move vehicles, equipment, people and supplies through many of the river’s tributaries,” Savitz added.

Ukrainian officials warned in March that the Russian occupying forces could be planning a referendum aimed at establishing a “Kherson People's Republic,” similar to the pro-Russian breakaway Donetsk and Luhansk People’s Republics to the country’s east. More recent reporting suggests that the Kremlin is considering a scheme to absorb Kherson, which is situated not far to the north of Russian-annexed Crimea, into Russia proper.

Pro-Moscow Kherson officials told Russian state news earlier in May that they plan to transition the city to Russia’s currency, the Ruble, within the next four to five months. Kherson was one of several Russian-occupied cities to hold public celebrations on May 9, the day when Russia celebrates the Soviet victory over Nazi Germany in World War II.