Will Russia Get What It Wants in Syria? 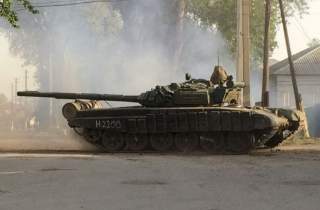 Key point: Moscow hopes to win big but could pay a high cost.

Just over four years after the Russian military intervention in Syria began, Moscow continues to enjoy the diplomatic, commercial and military rewards of its operations in the Levant. By driving a wedge between its NATO foes, testing out new weaponry and more, Russia has notched up a number of strategic and tactical successes in Syria. These gains notwithstanding, it's not all clear sailing for Moscow ahead: From greater exposure to militant attacks to the prospect that Russia will suffer collateral damage in regional power battles, there are plenty of risks ahead for Moscow.

Getting a Bang for Its Buck

One of Russia's most notable achievements in Syria has been the outsized gains it has attained at a comparatively low cost. By contributing a force of around 5,000 personnel, most of whom have engaged in air support, advisory and special operations duties, Moscow (in conjunction with Tehran) has stabilized Syria's reeling government, restoring Damascus' dominance on the field against the country's rebels. This, in turn, has secured Russia's Syrian bases — which now include both a port and air bases — given it access to a number of commercial interests in the country, enhanced the global perception of its military prowess and paved the way for it to grab a larger diplomatic role in the region.

In the diplomatic realm, Russia extended its partnership with Iran, transformed a tense standoff with Turkey into a burgeoning relationship and became a critical regional player that Israel, Jordan and (albeit to a lesser direct extent) Iraq and Saudi Arabia can scarcely ignore. What's more, it finally forced the United States to engage in extensive negotiations over regional concerns, including talks to eliminate chemical weapons in Syria, at a time when the United States and other Western powers were punishing the Kremlin over its annexation of Crimea and Moscow's other moves in Europe.

For the military, the intervention allowed the Russian armed forces to test new equipment like cruise missiles and new aircraft in combat, rotate a large majority of its officers into the theater to accumulate war-zone experience, drum up more export markets after highlighting the performance of its weapons and experiment with the large-scale use of mercenary forces such as the Wagner Group. Russia achieved all of this with so few casualties and losses of equipment that the high command has begun talking about using the Syria experience as a model for a new framework of operations it dubs the "strategy of limited action."

Even since the start of the Turkish incursion into northeastern Syria on Oct. 9, the Russians have achieved significant goals through their presence in the country. Not only did the United States begin the process of largely withdrawing from Syria — a long-term demand from Moscow — U.S. troops even handed over some of their bases and facilities directly to the Russians, giving them a potent symbolic victory that they have been only too pleased to milk for propaganda value.

The episode also marked a significant escalation in tensions between two key NATO allies, the United States and Turkey. Divisions between NATO's two largest militaries are very welcome news to Moscow, which continues to perceive the security alliance as a critical threat. Russia has been working hard to encourage this split, selling key weapons systems to Turkey, such as the S-400 that complicates NATO equipment interoperability, and encouraging a shift in Turkish alignment toward Moscow by offering select strategic concessions to the Turks in Syria, such as when it stood aside during the Turkish offensive in Afrin in January 2018 or struck a deal with Turkey on Oct. 22 to force the Syrian Kurds away from the Turkish-Syrian border.

The more recent Turkish offensive in northeastern Syria and the subsequent U.S. withdrawal led the Syrian Defense Forces (SDF) to reach out to the Syrian government, allowing President Bashar al Assad's forces to extend control over wider parts of the country. Both these developments significantly enhance Russia's influence and position in the country, by cultivating both a stronger and more entrenched Syrian government under direct Russian influence and by making Moscow an increasingly indispensable mediator among practically all the major remaining forces in Syria, including the SDF and Turkey.

Yet for all the gains that Russia has achieved through its involvement in Syria, there are more than a few clouds on the horizon. The first significant danger involves the far-from-complete fight against extremist groups in the region. With the SDF in disarray, the Americans largely compelled to leave the country, and the Turks focused on their fight against the People's Protection Units (YPG) — the mostly Kurdish backbone of the SDF — the Islamic State has a golden opening to rebuild itself in the resultant power vacuum in eastern Syria. The large numbers of violent extremists who are currently fleeing prison camps across northeastern Syria will considerably bolster the group in this effort. Furthermore, other non-Islamic State extremist groups in the country, such as the al Qaeda affiliate Hurras al-Din, will be better able to build up their strength as the overall focus shifts from their stronghold in Idlib province to other parts of Syria. Russia could find itself having to commit even more troops and resources to the campaign in Syria to combat the resurgent militancy that increasingly sees Moscow as a primary foe.

Even one of Russia's most notable achievements over the last year, the wedge it helped drive between Turkey and the United States, raises some significant risks for Russia. The first of these is the growing friction that is bound to emerge in Syria between Ankara and Moscow as the two share a growing front line across the country with the collapse of the SDF and the departure of the United States. Until now, their only main point of contact was the de facto border in western Syria between Turkish proxies and Russian-backed Syrian government forces. Now, however, the frontlines between the two will extend east of the Euphrates River, meaning the chances of possible skirmishes between their respective proxies will grow — which could even draw Moscow and Ankara into potential clashes with one another.

Another danger for Russia that stems from the souring relations between the United States and Turkey is the issue of nuclear weapons, particularly the potential collapse of nuclear sharing between Washington and Ankara. As part of the extended nuclear deterrence that the United States offers to its NATO allies, U.S. forces have approximately 50 B61 nuclear bombs stored at Incirlik Air Base in Turkey. These weapons provide reassurance to NATO allies, like Turkey, that they won't be defenseless against nuclear attack, although host countries cannot directly control them without U.S. authorization. With the growing rift between the United States and Turkey, the fate of this nuclear sharing policy is now in question. The New York Times recently reported that officials from the U.S. State Department and the U.S. Department of Energy are reviewing the future of U.S. nuclear weapons in Turkey. If the United States eventually decides to pull the weapons out, Turkey could very well decide to pursue a nuclear weapons program of its own, which would ignite proliferation across the region as others like Saudi Arabia would likely attempt to follow suit. The result would be a dangerous arms race that could destabilize the region and bring more nuclear weapons close to Russia's frontiers.

Moscow's stronger position in Syria also places Russia in the midst of significant regional enmities, particularly between Iran and Israel. Both Moscow and Tehran have offered significant support to the Syrian government, but Russian forces could find themselves caught in the crossfire if Iranian soldiers nearby engaged in hostilities with Israel. In fact, Russian soldiers have already suffered losses from the Israeli-Iranian struggle, as an errant Syrian surface-to-air missile downed a plane with 15 Russian personnel on board in September 2018 as Syrian government forces were trying to repel an Israeli airstrike. And even if Western powers are abandoning Syria, Russian forces could also suffer collateral damage in a retaliatory strike against al Assad's forces should the Syrians once again resort to the significant use of chemical weapons.

So far, Moscow's Syrian sojourn has been a success. With a minimal outlay, Russia has reaped the rewards, becoming the most powerful actor in the country. But its greater presence now makes Moscow more vulnerable to militant attacks and crossfire between regional rivals, while it has also extended its commitments in safeguarding the interests of both itself and the Syrian government. For Russia, thus, greater power ultimately comes with greater responsibility — as well as greater exposure to new dangers.

The Risks and Rewards of Moscow's Mission in Syria is republished with the permission of Stratfor Worldview, a geopolitical intelligence and advisory firm.