Will Russia Run Out of Precision-Guided Munitions? 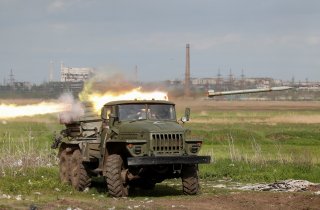 The Russian military is increasingly unable to acquire the technology needed to replenish its stockpile of precision weaponry of crucial importance to their continued advances in eastern Ukraine.

For months, there have been reports that Russia’s arsenal of precision weaponry has been running low. At the same time, the Russian military has also been willing to fire unguided munitions indiscriminately into civilian areas, killing families, children, and non-combatants.

Nevertheless, any kind of sustained offensive will certainly need precision weaponry to attack defensive positions, command and control nodes, and troop locations. Previously, Russian forces were reported to be running low due to the sheer amount of munitions, rockets, and missiles they had been firing. Yet, Pentagon leaders now say that sanctions are increasingly impairing Russia’s ability to replenish its stockpile of precision weapons. Many of these rely upon advanced technology such as GPS signals, inertial measurement units, and other kinds of guidance systems.

“[T]he other important fact to consider is that in addition to the crippling sanctions that have been put on Russia, there are these export controls that limit certain critical technologies, especially components like microchips that are essential for Russia to recapitalize its PGMs and standoff munitions. So it’s not just that their stockpiles have gone down appreciably because of how much that they've expended during the conflict,” Colin Kahl, Undersecretary of Defense Policy, told reporters this week during a press briefing. “[I]t’s just going to be a lot harder for them to rebuild the high-end pieces of their military because of the international export controls that the United States has championed, so I think that’s important.”

This is likely welcome news for Ukrainian defenders, particularly because Russian weapons shortages will likely impede effective offensive combat operations. Without air superiority, which Pentagon officials say remains up for grabs, the Russian military will lack the ability to attack Ukrainian defensive positions and fortifications from stand-off distances. With precision-guided rockets and missiles, the Russian military can pinpoint Ukrainian command and control nodes, force positions, and even armored vehicles if they have the necessary aerial surveillance and targeting data. An inability to attack these targets from 100-to-200 miles away means attacking Russian forces will need to strike from closer and more vulnerable positions. Also, the Ukrainians have dispersed their formations and decentralized command and control to make it difficult for Russian satellites and surveillance assets to identify high-value targets.

These kinds of targets, whether they be small groups of armored vehicles or force formations, would be extremely difficult to hit without precision munitions, and the Ukrainians are likely quite deliberate with efforts to disaggregate and minimize the amount of recognizable high-value targets. When it comes to less precise or so-called “dumb” munitions, Kahl was clear that the Pentagon and its allies may not fully know just how many Russia has in its arsenal.

“As it relates to other types of ammunition, my sense is they have a lot of kind of dumb artillery rounds and other munitions like that. I don’t think we have any assessment to suggest they’re reaching some inflection point where they're about to run out of that,” Kahl said.

This kind of development lends further evidence to the idea that the United States and its Western allies are increasingly becoming more optimistic regarding Ukraine’s long-term prospects. As time goes by, Russia’s ability to conduct offensive operations may decrease in increasingly significant ways. This may be one of many reasons why the coalition of countries supporting Ukraine continues to supply large amounts of weaponry, supplies, and aid.